Silence for the Dead 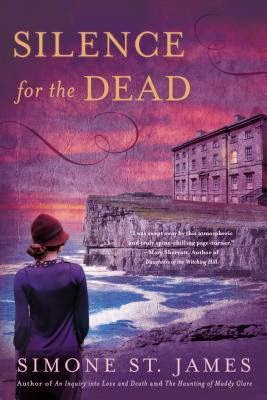 St James' third novel is an immensely satisfying ghost story, with a lonely, crumbling mansion on an isolated sea shore, complete with a dark secret; a house full of "madmen" -- really shell shocked soldiers; antagonistic coworkers; a possible love interest; a heroine who isn't quite what she says she is; and of course, a terrifying ghost.

It's 1919. Kitty Weekes has applied and been accepted as a nurse at Portis House, an asylum for soldiers who can't cope with returning to society post-WWI. Despite the fact that she's not a nurse, she falsifies her credentials to get the job, as she is desperate for a situation that will get her away from her violent father's reach.

But at Portis House, she realizes that something more than simple shell shock is traumatizing the men she's caring for. Why, for instance, are they all having the same terrifying nightmare? Her persistence and curiosity uncover some shocking truths about the family who built Portis House and then mysteriously disappeared years ago.

Kitty is an engaging heroine, intrepid and tough, even in the face of chilling danger. She observes and acts in equal measure, using her own experiences to analyze this current situation. I loved the creepiness of the story, and the romance element (Jack, a patient, reminded me very, very strongly of Captain Jack Harkness from Dr Who, and he's all I could picture...which isn't a bad thing...) As in her other two novels, St. James is able to create an elaborate story both around the heroine and the ghost/supernatural presences that the heroine encounters; both storylines mesh and work beautifully.

I thought the ending was bit inconclusive with this novel, though, and would have liked a more definite tying-up-of-loose-ends. Still, this was a spooky, entertaining, utterly convincing read. I really enjoyed reading it, as I have her first two books, The Haunting of Maddy Clare, and An Inquiry Into Love and Death. All three novels are set in England and follow romantic suspense genre expectations as set out by the greats like Mary Stewart or Victoria Holt. St James modernizes her approach though, and the heroines are strong and capable, making you want to cheer them on.

I like this kind of ghostly romantic tale, but even though I've read a lot of them, I found this one particularly chilling -- I had to stop reading it pre-bedtime as I was spooking myself with it! I guess that is a testament to the psychological power of the set-up in this novel. It's very well done, and I'd recommend it highly.