The Golem & The Jinni 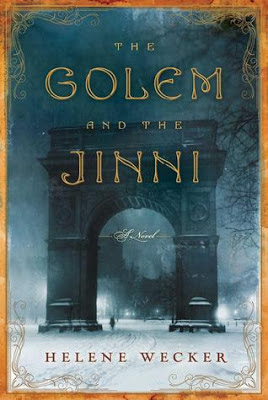 This is a book that I picked up solely because of the blog buzz around it. I'm so glad I did, as it was a wonderfully entertaining, creative read.

The premise: it's 1899 in New York, and two new immigrants are stranger than any official could have imagined: one is a Golem, a woman made of clay to serve one master. Unfortunately that master has died at sea and she is now an uncomfortable free agent. The other is a Jinni, a creature of fire imprisoned in a brass container 1000 years ago, from which the jinni is freed accidentally by the local Little Syria tinsmith as he tries to remove a few dents and scratches.

These two misfits have to figure out a way to survive in their new and unexpected surroundings, and the story circles around until they meet and their lives begin to intertwine. This basic storyline takes place against a rich backdrop of supporting characters, all complex and fascinating on their own. Chava (the golem) and Ahmad (the jinni) both have deep backstories, with chapters at the beginning suddenly coming to us from new characters' perspectives, or from distant locations or times. At first, I wondered why Wecker was spending so much time on why and how Chava and Ahmad came to exist, and how they end up in New York, but as the story continues the connections get tighter and more tangled, and it all makes glorious, necessary sense.

The narrative jumps between Chava and Ahmad, and between their different communities. They both find that without meaning to, they are connecting with the people around them, they are getting involved. The people that they meet are so well drawn; they are all individuals, complete and different, not standing in as a symbol for anything-- they are real, complicated people.

Since Chava comes out of Jewish folklore, and Ahmad from Arabic, there are deeper themes running under the fantastical storyline. I really enjoyed how Wecker takes elements of folklore and weaves them into what feels like a more straightforward historical novel. She addresses little things, like what was proper for women at that time (many of which don't make sense when thinking about Chava, a strong, powerful, independent being) or whether golems or jinnis sleep (they don't) or familiarizing the rituals and habits of the Other by showing so many similarities between human beings (or not human beings).

The story moves around in time, in setting, in perspective, and kept me spellbound -- I usually read a number of books at the same time, switching between them, but once I started this I couldn't put it down until I'd finished. The book itself felt like a magical brass container, full of mystery and magic that could be released by each reader -- and I may just have rubbed that gorgeous glittery cover a little, too ;) A jinni can dazzle, and show us new vistas, and even enter into our dreams... and isn't that what a good book does too?

This was a book that was equally strong in character, setting, and language. The plot keeps you reading but the character development and the strong evocation of place really shine. I also liked how the language is complex, using phrases from both cultures as well as maintaining a sense of old New York, but it also flows, drawing the story forward. It's hard to believe that this is a debut novel; it is really fine, with only a few hiccups here and there (for example, when Ahmad is first introduced, I felt that his description was getting perilously near to Fabio territory). But Wecker so creatively situates these two -- Ahmad becomes an apprentice tinsmith, Chava a baker -- that they feel real. She is melding two traditions into a true immigrant tale. A great read.