Ocean at the end of the Lane 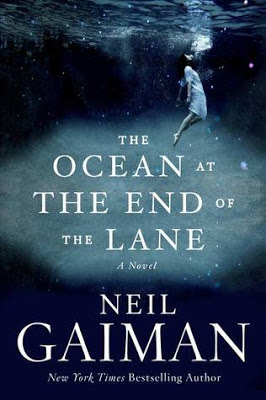 This small book holds a big story. But it's Neil Gaiman, so of course it does.

There's not much to say about this that hasn't already been said -- many bloggers have raved about it already. Like:

Andi, who says that "The Ocean at the End of the Lane is one of those rare books that I want to re-read immediately as I turn the last page. In short, a new favorite is born!"

Nymeth who has a great point   "Interpreting any successful narrative is a bit like seeing light through a prism: a story will reveal new themes and layers depending on the eyes of the individual reader through which it’s being filtered. What this particular reader saw here was what is perhaps best described as a dark, wistful, mythologized account of the process through which a constant hunger for stories gets lodged into your heart. This hunger is part of what keeps pulling you towards a bookish life, but it’s also something that has the potential to separate you from your social world."

or Aarti ,who points out  "In The Ocean at the End of the Lane, you are not quite sure how you feel about the narrator.  You know what he was like as a child of seven - lonely, quiet, and scared - but you don't quite know what he's like as an adult.  And that moral ambiguity - the uncertainty that the boy grew up to become a man who was worth all the effort - is really the lynchpin of this story."

(and if you have thoughts to share please leave them and/or links in the comments, too)

Still, there are some elements that I really found fascinating, that I wanted to talk about here. This is a brief book, which suits the story. There is a mythic sense to the story that is increased by the brevity, and the fact that Gaiman doesn't explain everything, that there is still mystery. I like reading and not knowing, I like that sense of the mysterious. Gaiman also shares his own spooky creations, like the existence of hunger birds, or nanny Ursula (otherworldly) and the inchoate rage of the narrator's father (very of-this-world, perhaps even more frightening).

The element that I was most drawn in by was the ocean itself, a pond on the Hempstock farm which set up echoes, for me, of the ponds in the Wood Between Worlds in C.S. Lewis' The Magician's Nephew. It's the world's womb, the place of creation, the source of all life. It's very dreamlike, very enclosing.

I also loved the Hempstocks. Our narrator, as a traumatized 7 yr old, meets 11 yr old Lettie. She takes him home to where her mother and grandmother also live, to be cared for and protected. The Hempstocks are a clear representation of the triple goddess, Maiden, Mother, and Crone. They've been around since the Old Country drowned, and the Old Old Country exploded.

And yet, throughout the story, Granny Hempstock is both extremely powerful and given to taking long naps that she can't be woken from, despite any need for her. Mother is a vague comforting presence, one who nurtures at times of crisis. And Lettie is a practical child, leaving the farm and stumping about in both our world and the world beyond, quite regularly. She befriends our narrator and lives in the present. And in the end, she sacrifices herself for him and leaves this world to sleep in the ocean, the source.

This might also be seen as a representation of the Trinity, Father God who is all powerful but awfully hard to pin down; Holy Spirit who is more of an amorphous figure, a comforter of souls; and of course the Son of God who lived among us and sacrificed himself to save us all. The story supports both male and female conceptions of triune divinity, and makes it seem utterly believable that these 3 figures are ancient beings, that they are of course always there looking out on this world.

There's more to this book than the Hempstocks, there is the idea of trauma and forgetting, the question of how much of the child is in the man, there is a line near the end that shakes up our understanding of the narrator's return to a place from long ago. There is a lot to think about and discuss. Like the best fairy tales and myths, there are layers and layers, and many interpretations possible. The story also delves into one of my favourite themes, the reliability of memory and what role our memories play in the reality of our lives.

But I'm going to leave my further thoughts on this as mysterious as the reading, as I don't want to share any more spoilers for anyone who hasn't as yet read it. Even if you've seen spoilers already, the book really isn't about the plot anyhow -- it's about the emotion of reading it. So go and try it out for yourself!