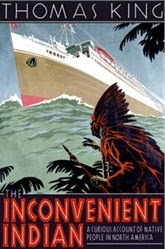 Like many others, I really love Thomas King. In fact I once went to a reading he was giving that started late because there were so many people they had to move us to a bigger room. He is a charming man, a funny and brilliant writer, and very convincing as well.

This is his explanation of Native life in the Americas from first contact onwards. Although his wife, Helen, told him he shouldn't start with Columbus, he does anyhow. And he goes into some detail explaining how he chose "account" rather than "history" for the title; history is too serious and comprehensive, while he just wants to have a bit of a conversation here. He does -- his tone is wry, amusing and yet so, so serious. As shared recently on twitter, at King's reading as a nominee for the Trillium award:


#TrilliumBook the brilliant Thomas King gets a laugh from THE INCONVENIENT INDIAN. A laugh to get our attention. Serious attention.
— Shona Cook (@wayfaringreader) June 18, 2013


It's true, he uses his trademark humour to get across a serious point; the lightness and wryness of his narrative make it easier to absorb the details, they slip under defenses or denials before a reader realizes it. And there is much to absorb here. Although he begins in the Columbus years, he then quickly sketches out how what happened in the beginnings of colonization affects the present, and heads right into the 20th and 21st century.

His ironic tone when it comes to white society, to aboriginal groups themselves, to his own biases and preoccupations, carries the book. He is able to see things from a remove, noting the ironic juxtaposition of tourism, politicking, land claims, images of the Indian throughout North American history, and more. The book informs, entertains, and also pricks the conscience. Really? Did that really happen? Was that history completely made up? Did no-one ever pay for that crime? Were -- are -- conditions really like that? These and similar questions kept arising as I was reading. And I have a BA in Canadian history, one in which this book would have been extremely illuminating, and for which it should be a required text now.

I did know many of the facts and stories he shares, but I knew them intellectually and from one perspective. I think that the strength of this book lies in both its tone and the intimate knowledge of the author of both the facts and the feelings behind the examples he shares. He is exacting in his recounting of the factual record, at times inexorably so. Yet he also insists upon the primacy of the more amorphous motives, emotions, and lived experience of these events. It is a powerful blend, and makes this a necessary read.