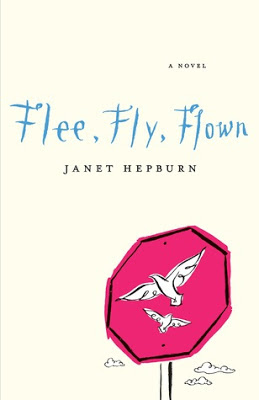 (spoilers ahead, kind of: the ending is revealed. But I feel this book is about the characters first, the setting and then the plot - so knowing the facts of the ending doesn't spoil the read, for me)

This is a great choice for a summer read: road trip, two feisty senior citizens, handsome young man driving, what could go wrong?

Quite a bit, actually, if we're talking Lillian and Audrey, on the lam from their Ottawa nursing home. They're partners in crime, chafing for an August vacation, still lively and vibrant and full of snappy dialogue -- most of the time.

Both of them have Alzheimer's, the severity of which differs from day to day, dependent on tiredness, hunger, or random chance. They both know they can't take the dull routine, boring food, or condescension of their children or the nursing home employees one minute longer, though. So they skip the joint.

They've carefully planned this. They escape from the home with their backpacks full of supplies (forgetting their medications), they 'reclaim' Audrey's old car which she had sold to her neighbours when moving to the home, they serendipitously find a driver hanging out on the Ottawa streets when Lillian realizes the driving is going to be too much for her. They tell this young man, Rayne, that they're heading west, and since he's hitchhiking home to Alberta he agrees to be chauffeur.

And they head for points west. The novel ranges across Ontario, into Manitoba, then crosses over into Saskatchewan and finally into Alberta before they are finally forced to call it quits. It's a great road trip, with nights in small motels, explorations of diners, grocery stores and shops along the way, and frequent stops at lakes, parks and other natural settings. Once Rayne figures out who they are and what they've done, thanks to national bulletins about two lost women, he panics and nearly leaves them. They convince him to keep going just a little longer, but the tone of the novel becomes darker, more ominous. You know that something has to happen, that they can't keep on travelling forever.

While, fortunately, there is no absolute tragedy, I felt that the conclusion of the book was a quiet tragedy. When Lillian has an accident, Rayne insists that the women call their children, and with that their trip is at an end. Lillian's daughter Carol arrives, Rayne quietly disappears (leaving the stolen car outside a police station) and the two women return home via airplane, back to the place they intended on leaving. There is some hope, as Lillian remains intransigent internally, already making plans on how to thwart everyone else's plans for her. But throughout the book, as we see the confusion and lapses both women suffer, we know that there is no escape, that they will never be able to leave care.

And it is very sad. The book is a light tale, intended to be a bit of a romp, I think -- look at that pink cover! But there was a level of discomfort in the reading, as I saw these two women losing control of their choices in life. This road trip was a last kick at the can, an attempt to recapture autonomy, and it fails. The book itself succeeds quite admirably at delving into the internal worlds of two women who are only seen as patients, at displaying the complexities of their lives and their ontological integrity despite such a desperate illness. When we are believed to be a "self" only through the action of our memory, what happens when that memory begins to fail? This is an issue that Hepburn is addressing here. It's a fun read, but anticipate some depth and some pathos along with the hijinks.