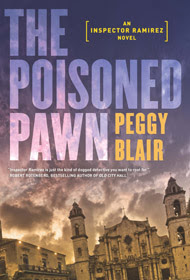 This was a light mystery I picked up recently, book two in a series of which I haven't yet read book one! It features Cuban detective Ricardo Ramirez, who has to travel to Ottawa to follow up leads on a very complicated case which includes Canadian tourists, mysterious poisonings and much corruption of many bureaucratic organizations.

It paints quite a picture of life in Cuba -- the shortages, the differences between what tourists are allowed to see and what daily life is like (there are even two currencies: Cuban pesos and tourist pesos). There is a lot of description of the daily routines of Ramirez and his department, as well as his family life, always turbulent. Despite official agnosticism, there are still many practicing Catholics and those who practice Santeria in Ramirez' life, including his grandmother, who left him with the gift/curse of seeing ghosts. He is by now resigned to seeing murder victims in his living room until he solves a case.

There are predictable moments when Ramirez gets to Canada, like his shock at the cold. There are also comparisons pointed out between Cuba's third-world conditions and those of Native reserves all over Canada, when Ramirez is met at the airport by an Ojibway officer, Charlie Pike. In this instance, I found that the author didn't allow much subtlety of interpretation, rather she spells it out, coming across as somewhat didactic. Still, the conditions on reserves and in residential schools do play a part in the story, so for non-Canadians this approach may be necessary to aid understanding.

The mystery itself is complicated, a multilayered twist of various strands that end up not being completely connected, but in searching for the answers to one case, the other is invariably implicated. These strands connect Ottawa and Cuba, and Ramirez must walk a fine line between the expectations of both sides in order to sustain his precarious lifestyle in Cuba. He wrangles the corruption in each place with enough panache to preserve himself, while meting out justice, as much as he is able.

It begins with a poisoning of a Canadian woman who is fleeing Cuba, carries on with a dead woman in an alley in Havana, and has a suggestion of widespread child abuse as an element in the case. Ramirez, with the help of both the local coroner, a dwarf named Hector Apiro, and the contacts he makes on his Canadian visit, must find the connections.

The setting is an integral element of the story, and Ramirez' world is fascinating. Even without reading the first book I was able to follow along and get to know the characters sufficiently to become involved in the story. If you've ever travelled to Cuba you might find this one particularly interesting for its inclusion of everyday detail. Quite unusual, and intriguing in its variety of characters.
Posted by Melwyk at 5/12/2013 01:27:00 am