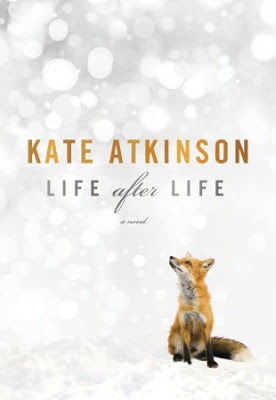 There's been much talk about this book recently, and as my hold finally came up at the library, I read it over a couple of days last week. Wow! There is a reason for the buzz.

And that is essentially what Ursula is doing. The cleverness lies in the way Atkinson details it; at each death, she returns to the point where things could have gone differently, and starts anew. As Ursula gets older, this can entail going back a number of years -- the connections get more complicated as more is happening. Some of the situations are ghastly, violent and so sad. And some are simply unfortunate. During a spate of Ursula's childhood accidents and restarts, my husband commented, "It feels like I'm reading the Gashlycrumb Tinies." So true!

But the detail in each part, the small things that shaped the direction of life -- Ursula's small wooden knitting doll, heavy snow delaying the midwife, a moment's distraction during the Blitz, being unable to celebrate VE Day -- these details create a layered, enthralling world that I was utterly absorbed into.

I loved how Ursula became more aware at each restart that something was going on. She has a strange sense of familiarity, put down to déjà vu, when she is repeating something, trying to fix it, to change the possible future. It was brilliantly conceived, and brilliantly executed too. I read it in a mad rush, so impressed by the skill and imaginative power involved.

Upon reflection, there were some elements that were perhaps not as compelling. In one of Ursula's futures, she ends up marrying a German during her pitiful continental tour post-school, and has a child. By some stroke of luck, she befriends Eva, a young woman who brings her along to a posh retreat in the mountains for the sake of her daughter's health. It's Eva Braun, of course. But things end badly. This German episode felt a bit divorced from the tale that had come previously, but its reasons for being become apparent in the following pages.

Ursula begins again and again, and finally recalls enough to set herself a course of action. She plans, prepares and puts into motion her essential reason for living -- returning to Germany and finishing off Hitler. This is a bit unsatisfying; is Ursula really just an instrument of fate? If things can be altered by such a little detail, is Hitler's demise utterly in her hands alone? To me, this exposed the germination of this tale, as we have probably all considered that question -- if you could go back in time and kill Hitler, would you?

Still, this was an amazing read, and now that I've finished I would like to go back and begin again, and pay attention to all those details I'm sure I missed in my first quick reading. If this book didn't have to go back to the library, I would! It was clever, but also very compassionate and human. Ursula was a deeply felt character, distinct from her siblings, unsatisfying to her charming mother, uncertain about what she wanted from life. I was drawn into her world and into her inexplicable condition. I found the repetitions in the narration as she begins anew each time both strong and affecting, as the reader could see the minute alterations and try to figure out what had changed and what the results might be this time around.

This was an excellent read with internal echoes adding colour and weight to the story. I felt that there were certain similarities of atmosphere or theme in a couple of other books I've read recently, which would make great companion reading. My suggestions:

The Children's Book by A.S. Byatt -- for the pre and interwar setting, the sense of large families in the country, the intense interiority of the main characters, the looming presence of the War.

Blackout/All Clear by Connie Willis -- for the episodes in the Blitz, the fluidity of time, and the emotional punch of unexpected losses
Posted by Melwyk at 5/13/2013 08:30:00 am