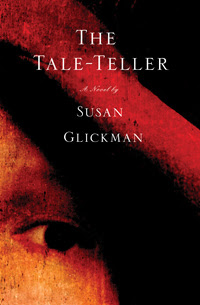 This was a perfect book for me: I love stories of intrepid women, and also stories about early Canada. This novel is based on an historical character, Esther Brandeau, it's set in New France, 1738, and involves mysterious characters, gender confusions, and tall tales.

The book opens aboard ship, when Jacques Lefargue gazes at the sky and sea and relishes his freedom en route from France to Quebec. He's a young but accomplished boy, with the sailors impressed by his knowledge and comfort with sailing. Still, he chooses to disembark in Quebec despite their offer to keep him on as part of the crew.

Almost immediately, his male disguise is shed when port officials question him, and reveal him to be, in truth, Esther Brandeau, unaccompanied woman and worse yet, Jew. At this time it was illegal for Jews, or anyone other than a Catholic, to immigrate to New France. But, transport being what it was, Esther is assigned to stay in various places while she awaits judgement on her fate from France, news of which will take months to arrive.

Feeding curiosity, Esther tells imaginative tales to her interrogators -- sole survivor of a shipwreck as an infant, she was raised by apes... rescued by sailors she was stranded with two shipmates on a rocky islet in the middle of the sea for months... she was lost in the desert and saved by Tuaregs... these tall tales and more amuse and titillate the residents of New France. Slowly, as the story progresses, we start to learn the truth about Esther, as facts slip into her narratives. What we discover is sadder yet no stranger than the glamour of her stories: she was an illegitimate child, disliked by her stepmother, constrained by gender and race, and made the decision to flee her fate and travel Europe and beyond disguised as a boy, which she had done successfully for five years previous to coming to Quebec and being unmasked.

It's in the details of daily life in New France, juxtaposed with the Arabian Nights impulse in Esther's talk, that creates such a fine tension in this book. She opens the horizons of the world with her stories, tempting some of the more staid residents to imagine other possibilities for themselves. And when her judgment comes, she accepts it and moves forward, letting the past few months drop away. She creates her own past and in doing so, creates her own present. Esther is a slippery character; the reader is never quite sure their grasp on her is firm. She is fascinating, and doubly so once you read the historical document included in the afterword which mentions this strange arrival.

In the afterword, Glickman states that the nature of Esther's character was most intriguing to her as a writer -- what made Esther decide to become a boy, and travel so widely? What kind of person was she to be able to do such a thing? This is certainly a thorny issue, and has intrigued others to try to recreate Esther as well; Glickman mentions two other novels based on Esther's brief mention in Quebec history, Sharon McKay's teen oriented Esther, and Pierre Lasry's Esther: A Jewish Odyssey.

I enjoyed Glickman's take on this episode though. This story is told in language that feels suited to the period, simple and yet different enough in style to suggest a different time. Each chapter opens with a Ladino proverb, which also adds something to the theme of each section. The mix of historical and fantastical works very well, and made this a very enjoyable read.
Posted by Melwyk at 2/20/2013 09:22:00 pm