Last Night at the Ritz 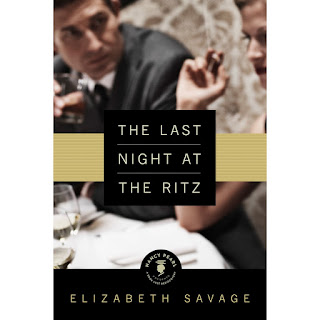 This is the second Book Lust Rediscoveries title, selected by Nancy Pearl, that I've finished. I enjoyed it quite a lot -- it was short and snappy, with a fascinating narrator. In her introduction, Pearl discusses the appeal of the writing, suggesting that "a great deal of its charm and memorableness comes from all the supremely quotable lines in it." There are so many gems, many of which, however, work best in context. Still, there is the much quoted line below which I also love:

“It is very dangerous to get caught without something to read.”

The introductions to these books have thus far not been entirely about the actual text, but rather, about the reading experience. Pearl mentions how and why she discovered the title, what it means to her, what kind of readerly connections and/or encounters she's had in relation to the book, the social context of the story, and so on. Of course, she also highlights why it is that she's chosen it for republication. I'm finding these essays as interesting as the actual books, and they've made me think about how I share what I read as well. (and have I mentioned how charming I find the logo on the front of each book? It's so cute)

But on to my thoughts on this book: The main character (our narrator) is unnamed. As the book opens, she is meeting her old college friend Gay, Gay's husband Len, and an old flame, Wes, at the Ritz-Carlton in Boston for one last dinner before...well, before something that she skirts around and refers to obliquely until the end of the book.

We aren't quite sure what the issue is that she is facing, other than that is it a serious medical event, but the outcome is by no means certain. Though the story takes place over two days, through the narrative discursions we become familiar with our narrator's long friendship with Gay and all that they've experienced together since they bonded as best friends in college. We learn about the past 25 years, including secrets and lies, desires and loathings, and events both happy and tragic. It's nothing startling, stylistically, but the narrator has a wonderful voice (despite being drunk most of the time) and the habit of only telling you half a story then circling back to it later, a fine way to hold the interest of a reader. The tone is flippant, natural, witty, and very much of its time (set in late 60's).

Our narrator is the wilder, more exuberant half of the pair, while Gay (despite her name) is quite proper and often disapproving. Together, they are a matched set. About Gay, the narrator says:

"Gay's never approved of me. But she's always loved me. The two things don't have as much to do with one another as some people think."

The setting is also fascinating -- I felt like I'd taken a brief tour of Boston and environs by the time I'd done, and thought that the characters inhabited their surroundings thoroughly. Actually, at times I was a little taken aback by these adults getting so drunk and acting so obnoxiously, wandering through parks at night and causing a fuss -- something I associate with early adolescence! But the story appealed to me. I enjoy this kind of interior focus, and having the main character tell us all about both what is happening and what has happened was fine with me.

This isn't the usual kind of book I read -- in its being American mid-century, I mean. So it was an interesting and stimulating read, that was also quite unexpected and not something that had been on my TBR. Overall, a satisfying find.
Posted by Melwyk at 2/23/2013 09:00:00 am