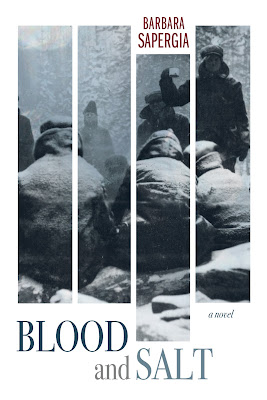 This is a book that I knew I'd be fascinated by: it tells the story of Ukrainian Canadians who were placed in internment camps during WWI, under the mistaken assumption that they belonged to the AustroHungarian empire and were therefore enemy aliens.

The fact that there were Ukrainian internment camps comes as a surprise to many people; but there were, both in Western and Eastern Canada. (another book that deals with this issue, though aimed at children, is Marsha Skrypuch's Prisoners in the Promised Land It looks at the eastern camp of Spirit Lake which was again different because it held whole families, not just men.)

This is a book written in a simple, conversational tone. It isn't fancy. It tells an important story in a way that feels as if you're sitting listening to someone talk. The main character is Taras Kalyna, who immigrated with his parents after they feared he was going to have to fight in an upcoming war for Austria. Taras' true love Halya immigrated ahead of him with her father and grandmother, and Taras swears he will find her.

The Kalynas get to Canada and take a long train ride west to their new land. As they settle in and begin to make a life for themselves, WWI begins, and Taras, as a young healthy man, is arrested and interned at the Castle Mountain Internment camp (although there is some question as to who turned him in and why...) He and the other men interned are required to hack through forests and dig rock to build a new highway, the Banff-Laggan (Lake Louise) road, summer or winter. Some of the guards are decent men, some are typical of those guarding others -- power hungry and abusive. There are many men in the camp, and Taras finally finds his own private circle, a varied group of men he befriends through proximity. The kinds of men -- a socialist, a teacher, an artist, for example -- in Taras' circle allow for the story to insert elements of the Ukrainian Canadian story in a natural way. And there is a lot of history in this book; I felt that Sapergia was able to weave the facts and the "lectures" into the story very naturally, and give it a meaningful context so that it didn't feel like a textbook or a clumsy history lesson. Each of the men has a past and a particular interest, and their relationships with each other and with the guards develop naturally to provide a complex picture of the situation.

But this book is something more than a history of internment camps. The back story and the incidental side characters are both developed fully, allowing for a lot of mystery and resonance in the telling. We learn about  life in Ukraine that led many to emigrate, we see, taste and smell Western Canada as it looked to immigrants in the early part of the century, we learn fascinating social realities and meet Ukrainians who are not all the same, who are not a faceless mass of "peasants in sheepskin coats" but are individuals with particular habits, mannerisms, fears and joys, likes and dislikes. Not only Taras' story is told, but also Halya's (she is a great character) Through her we get a glimpse at women's lives during this era. Taras' friends in the internment camps also have stories before and after their experience there. His parents make their own way through this new land, befriending Moses, the local "black Ukrainian", an orphan from an African American immigrant family who was adopted by a childless Ukrainian man and grows up to be both black and Ukrainian by language and culture.

It's a rich tale that is paced well and reveals injustice and horror, as well as loyalty, friendship and true love. You don't have to be Ukrainian to enjoy it, but you will certainly learn about the Ukrainian Canadian experience if you do read it! I'd be shocked if this book didn't end up on the shortlist for the Kobzar Award, as it raises awareness of Ukrainian Canadian culture in a beautifully readable way. Highly recommended for anyone looking for stories of Canadians that have remained untold for many years.

**there is a monument to the Ukrainians who built the road, right alongside the highway at the site of Castle Mountain Internment Camp. It reads "Why?" in English, French and Ukrainian. 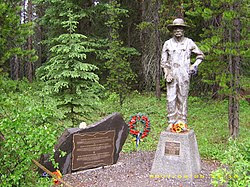