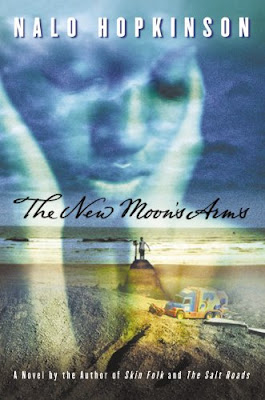 
This is a book I've been meaning to read for a while now, and have had a copy on my shelves for a long time.  When Aarti's reading challenge, A More Diverse Universe, came along, I knew the time was right to read this!

Nalo Hopkinson is based in Toronto, where she's lived since she was 16, after growing up in the Caribbean. I enjoyed what Nalo said on the FAQ page of her website about her identity as a writer: 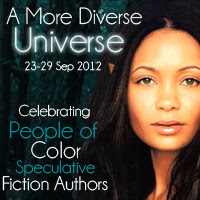 All of these elements are wrapped into this novel. Calamity Lambkin (born Chastity, until changing her name to reflect how she sees her self) is living on the fictional island of Dolorosse. She's been nursing her father through his final illness, after many years of estrangement due to her teenage pregnancy. Now in her mid-50's and going through 'the change', Calamity's life is turning upside down, starting at her father's funeral as the book opens.
She rescues a lost toddler washed up by the sea (where the magic in this story comes from; he is a first suspected then shown to be a mer-boy) -- she is forced to be civil and reconnect with her first love Michael (her daughter's father) plus his lover -- she finds that her long lost prepubescent power of 'finding' things has re-emerged with menopause. Things appear out of thin air when she has an unexpected hot flash and a tingling in her fingers. And not just little things, though it all begins with a long-lost brooch...no, eventually she's finding entire orchards popping up in her yard overnight.
Calamity is a complex character. She is prickly, hard to get along with, demanding, and very focused on herself. She is very unhappy with the thought of getting old and is fighting it with everything she's got. She is a sexual being, and she is powerful in her own right. She is a flawed, realistic individual who can be very loving with the rescued toddler, Agway, while spewing homophobic vitriol at Michael and his boyfriend.  You never feel that Calamity is trying to win over the reader; she could care less what you might think of her, she'll follow her own instincts in all cases. It makes for a fascinating reading experience, as Calamity reveals things that she doesn't seem to see as problematic about herself, like her intolerance or her extreme resistance to aging.
There are many subplots and side characters in this novel, which is both its strength and its weakness. I loved some of the side stories, like the snippets at a seal house in the Zooquarium, or the mythological story of a slave ship and its connection to the sea people, and there just wasn't enough of those elements for me. Also, a major mystery and developmental milestone for Calamity was the loss of her mother at age 12 or so -- it seems to be very important and yet that storyline kind of gets left behind in the conclusion of the book.
Nevertheless, this was an intriguing novel that I really enjoyed. I felt that the rhythms and phrases that Calamity and her neighbours spoke with added to the sense of place. The many  offhand references to politics and ecology and mythology -- and family dynamics! -- gave shading and depth to the main story, that of Calamity's life change. While the presence of Agway and the sea people gave the tale its magical elements, they weren't the sole focus of the book. Instead they were woven in to Calamity's life story. She was a strong protagonist, not necessarily a likeable one, but a powerful anchor for the story.
It was an appealing introduction to Hopkinson's work, and I'll definitely be picking up another of her novels.