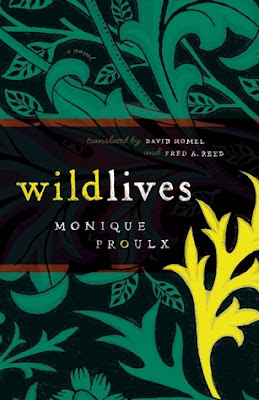 
I read this book in just a couple of days...it's been on my list for a while, but NOW was the perfect time to read it! I've been in a little bit of a reading slump lately, and this fantastic novel really snapped me out of it.

It's set in the Laurentians (Quebec) over the course of a summer. The book is divided into sections: June, July, August, September. It follows a group of people who live around Goose Lake, a relatively remote, quiet lake. Lila Szach, an older Polish woman, owns most of the property and she has rented out a few cottages, while people from Montreal own one of the nearby homes. There is also a town fifteen minutes away whose residents show up in the story as well. The plot isn't too complicated -- it's the characters and the setting that drive the story, and the lovely turns of phrase that Proulx comes up with.

Each of the characters has something they are hiding and/or discovering about themselves. Lila has been there for years, and has a longstanding issue with the family who owns most of the next lake and wants to buy her 1000 acres to develop a 'recreation area'. Simon, from the next cottage, is called "The Parson" by others because of his willingness and ability to listen to everyone's sad stories, a tendency which involves him in others' lives to a great degree. Claire from Montreal writes horror scripts for television, and has a dull marriage which will experience upheavals this summer. Violette, a beautiful young woman who is renting one of Lila's cottages, is a survivor of cancer and childhood abuse. One of my favourite characters is Jeremie, a very young boy who is recovering from a house fire which nearly killed him; he's been sent to live with his Uncle Simon for the summer while his flaky parents sort out their divorce. Jeremie is obsessed with Harry Potter, thinking of himself as "Jerry Potter" and seeing the woods around him in Potteresque terms. He believes that Lila is a sorceress and fellow wizard, and begins to follow her on her treks around the woods. Their developing relationship is marvellous; I really enjoyed the two of them together.

But what I really loved about this book is simply the setting. Proulx describes the lake, the forest, the small plots of domesticated "lawn" around the cottages, wild rasperry patches, remote rock faces, the animals living and thriving around them (squirrels, loons, bears, deer, bobcats, pike, snakes, frogs, bugs and more). It felt like a trip to the cottage -- I could picture Goose Lake very clearly. I could almost feel the heat and bugginess of a summer day, smell the pines and the lake smells, hear the silence of a forest broken by the distant sound of a motorboat on the next lake over. Goose Lake is solely for canoes & kayaks -- no motorized vehicles allowed. That's the kind of lake I loved spending time at when I was young, and really haven't had a chance to revisit in years. So this book gave me a virtual visit.

By the end of the book, summer is over, and everything is changing. It's sad in a way, but also feels fitting. The only thing I wasn't so keen on was the final few pages. Proulx jumps ahead to show Goose Lake from Jeremie's perspective as an old man, a grandfather who has spent most of his life at Goose Lake. While I recognized him from earlier in the book I'm not sure I needed that extra view. It made the story, which tied itself up very satisfactorily, seem not quite complete after all. Kind of like the final afterword in Harry Potter's "Deathly Hallows" ;)

Here's where the title appears -- as the screenwriter contemplates having to leave the lake forever, she thinks, "The fruit, the trees, the small animals: she knew each by its name, whereas Luc, tools in hand, gave them only a passing glance. He was the outsider, the builder, while she was an adopted member of the great family of wildlives." And the novel explores where all the characters fit in this greater world, the world of beauty as represented by untamed nature. What is the value of our small human life in light of the vast, neverending cycle of wildlives? How can its beauty save and uplift us? These are just some of the questions which arose in my reading. This was a great read, absorbing, evocative, rich. Recommended.