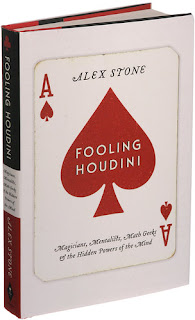 A book giving away the secrets of magicians, mentalists and more... a book about the tricks our own minds play on us... a book about a young man's journey through the world of magic in search of himself...

Imagine the sentences above announced in that deep movie-trailer-guy's voice, with dramatic music behind it, and you'll get an idea of the showmanship that is a huge part of this story. It's a great read -- it moves quickly and shares tons of information on the lives of modern magicians, mentalists, scientists and researchers. The author is a math geek and a physics PhD student, and his story, therefore, examines magic through the lens of math and science, including neuroscience (one of my favourite things).

The author is also a magician, however, and his knowledge of the characters who make up the modern magical subculture is extensive. He took a lot of time to observe, interview, and study with many big names. He spent time learning their techniques at the workshops and "magic schools" that many of them run, going to endless shows and watching carefully, attending the "Magic Olympics" (and the story of his attempt there is cringe worthy!), and even approaching street gangs in New York who run card cons, something he was warned against. He shares his notes with us in this book, telling us how some tricks are done, how magicians react to having their secrets shared (some really mind, some don't). The book is arranged by subject, so each chapter deals with some aspect of the wider magical world: card tricks, schools and workshops, history, mentalists, con men and grifters, psychology and neuroscience and more. One of the most fascinating things for me was the discovery that there is a Conjuring Arts Library in New York...wow! Would I love to work there? Yes, please!

The book is really the story of Alex Stone's search for his own brand of magic, for his own place in this world. As such, he has a personal touch in his telling, and endless fascinating anecdotes to share. However, at times this approach felt distracting, as his comments on his varied girlfriends throughout the book felt a little forced -- but that was my only iffy reaction to this book -- otherwise I enjoyed his tale and the arcane bits of knowledge he tossed out over and over again.

Reading this made me want to pick up some cards and start doing magic...his enthusiasm for his subject is catching, and anyone interested in close-up magic will be fascinated. This is a book that will foster further research for anyone who catches the bug, so beware of who you give it to! I particularly enjoyed the look at the mathematical principles behind card shuffling and a trick Stone develops; although you know "how" it is done, it is still impressive because of the sheer amount of time and work a magician must put into an act to make it truly astonish an audience. The psychological studies of how the brain lets us fool ourselves were also fascinating. I'd love to read more on that aspect -- it is funny how we think we are totally in control and yet there are so many things we don't even notice about our surroundings.

Going in to this read, I had no idea it was going to delve into the science behind magic so deeply, and I loved it. But Stone has also balanced both aspects very nicely and revealed equal enthusiasm for magic itself and for how it works. This was a great find that I read compusively over an entire weekend -- a very enjoyable non-fiction read that I'd recommend to anyone with an interest in any of the topics he covers. You'll be intrigued by things you didn't even know you were curious about!
Posted by Melwyk at 7/10/2012 08:30:00 am