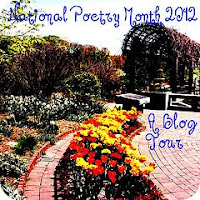 As part of the celebration of National Poetry Month, Serena at Savvy Verse & Wit created a blog tour and giveaway. Today I am lucky enough to be hosting a stop on the tour -- and I hope you'll go visit all the stops on this tour so you can feel replete with poetry this month. There's been a great variety of topics and interests covered so far, and we still have half a month to go!

Well, seeing as today is Friday the 13th, I thought I'd talk a little about superstitions. How do superstitions show up in poems? Do poets have their own superstitions about writing?

I'll begin by sharing a poem which I found at the Poetry Foundation. In it, a Romanian poet alludes to the way people create superstitions by attaching meaning and causal relationships to odd or unconnected events. His is a personal superstition, attached to that much maligned creature, the house cat.

My cat washes
with her left paw,
there will be another war.
For I have observed
that whenever she washes
with her left paw
international tension grows
considerably.
How can she possibly keep her eye
on all the five continents?
Could it be
that in her pupils
that Pythia now resides
who has the power
to predict
the whole of history
without a full-stop or comma?
It’s enough to make me howl
when I think that I
and the Heaven with its souls I have
shouldered
in the last resort
depend
on the whims of a cat.
Go and catch mice,
don’t unleash
more world wars,
damned
lazybones!

Another poet's attempt to do the same thing, incorporating existing superstition and exploring linkages to develop new ones, is "Superstitions" by Malcolm Glass. I found that both of these poems illuminate the mindset of the wary, of those who are inclined to find meaning everywhere, and hope to ward off danger through random practices.

But more than just writing about superstitions, poets and writers often hold to many writing rituals that they are superstitious about breaking for fear of affecting their ability to produce any writing at all. I recently read an amusing article about the particular conditions a young writer feels he needs in order to create. He states that he wishes he had some cool superstitions such as “I drink two cups of lemon juice with lunch,” or “I channel the ancient goddess Sekhmet over cereal,” but unfortunately his are more mundane, like using a particular font for each kind of writing that he does. I have a few of my own, like only using purple ink to write first drafts longhand. Strange but hard to break away from! Do you have your own?

I'll finish off this brief look at the superstitions in and around poetry with a comment on the idea itself -- in a wonderful article about using superstition in writing, Aimee Nezhukumatathil states:

Some may regard it as a curious relic dating from less scientifically advanced times when people sought explanations for the apparently random workings and spinnings of nature. To others, superstition is an integral and constantly shifting part of the richness of culture in an increasingly secular world.

She goes on to say that superstition can be incorporated in a poem to create a sense of universal truth around the unexplainable. This article is a must-read for those who write poetry, and it concludes with some writing prompts. So if you are up to it, try using one of her superstition prompts to write a piece of poetry this month...and share with us if you are so inclined!

Well, I'd better go and keep my black cat from walking under a ladder and knocking the mirror off the wall. Thanks for stopping by to peruse today's post!

Email ThisBlogThis!Share to TwitterShare to FacebookShare to Pinterest
Labels: Poetry