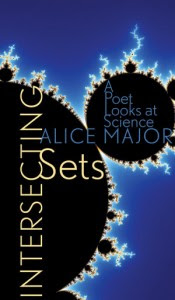 I thoroughly enjoyed this set of 11 essays exploring the intersection of poetry and science. These two subjects, as well as their interactions, are two of my absolute favourite things; I love to study the neuroscience of reading literature, for example. This book was very satisfying -- literary and poetic in style, it also had a high level of "scienticity", as Major develops her themes in various areas of biology, linguistics, physics and more.

Major's premise is that for too long, Science and Art have been considered separate spheres, at odds with each other, or perhaps even antagonistic. Scientists and Artists are assumed to hold competing worldviews. Major posits, however, that the separate worlds of Science and Art are more like a Venn diagram, with lots of commonality -- points of which she explores in her essays here. Or, as the title states, she's exploring the Intersecting Sets of Science and Art.

She's a poet who was turned on to physics at a young age, thanks to reading Martin Gardner's book on Relativity, and is able to draw parallels between the literary arts and many areas of science in a very natural way. The chapters range in subject matter and tone, connecting varied areas of science and poetry, but are entirely comprehensible and sparked more and more new ideas... kind of like a fractal pattern in themselves. I really loved the chapters dealing with physics and with neuroscience (my particular areas of interest). But I learned something with each entertaining and thoughtful essay, which to me is the sign of a great read. This is one of those books I classify as "dinner party books", since you learn so many tidbits to dazzle others with at your next dinner party! (I have a whole shelf of those)

She does not claim to be a science writer, merely a poet who is interested in science, one who has kept up on developments in her layperson's role. I am also a bookish individual with a strong interest in science, and I don't think that discussions of such should be limited to "professional" scientists or science writers. Both poetry and science allow for new understandings of our world, and new ways of seeing, even if from different angles. Major's particular angle is that of a longstanding poet, and her vision of how the 'dreamy' world of poetry and the 'rational' world of science intersect was compelling. The essays do not form a rigorous argument as to any one "side" but rather range widely and expose the reader to new ideas as they arise in many contexts. I liked this approach, as it provided room for the reader to graze and discover things that they might not even realize they were interested in.

I found this book enjoyable and thoughtful. The references to scientific studies and concepts had me making notes about things to look up and learn more about. The references to creating poetry had me thinking more deeply about the collections of new poetry I've been perusing lately. And the way in which Major concludes that poets and scientists must both develop “the ability to simultaneously maintain conviction and doubt” seemed to me a description of the educated mind in general. She finishes by suggesting that the separation of poetry and science is facile, that rather than being emotion vs. rationality, both areas are full of emotion. It's an element of human life that can't fail to colour everything we do, whether we acknowledge or deny it.

(a final note: as usual with the University of Alberta Press, this book is printed on 100% recycled post-consumer paper. It also includes acknowledgement, by name, of the copyeditor & proofreader. UAP, always classy!)


More about The University of Alberta Press