Case of the General's Thumb 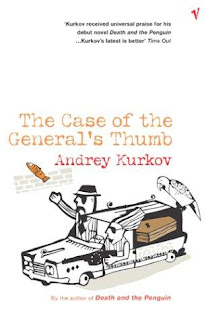 This book has just been released by Melville House Books in North America -- however, my copy has been with me for quite a while, as it is the UK translation which I picked up at a small English language bookshop when I was in Kyiv in 2008. I know, I know, why has it taken so long to read it? Well, I was saving it, hoping to hang on to that sense of possibility and anticipation for as long as I could. However, I've since read two other books by Kurkov (Death and the Penguin and Pengin Lost) which I got via the library -- and they were both very good. So I decided it was silly not to read this book which was just sitting on my shelf easily available to me.

It is definitely in the same line as his other books, though perhaps a little more slapstick, a bit more action oriented. The bizarre nature of the tale can be seen in this cover -- a Bonnie & Clyde style adventure that includes driving a hearse, tossing fish over gates, and carting around a parrot. Too bad it doesn't show the turtle... As you can see, there is a large serving of absurdity in this tale.

It begins in Ukraine, in the Maidan (main square) where a general is found dead, attached to an advertising balloon, missing a thumb. A police officer and a KGB agent are assigned to investigate, neither of whom trusts the other. Add in a criminal or two also on the trail, and the resultant chaos leads the story all over Europe -- from Ukraine to Germany and beyond. The surreal characters are weird but compelling, and the action is as incomprehensible to the characters as it is to us at times. But it is darkly funny and I read it very quickly and with great enjoyment. There is something about Kurkov's sense of irony and humour that appeals to me, and even the bleak violence of life as a Ukrainian criminal is bearable when he writes about it.

His style is very particular -- in this one there is a lot of jumping back and forth from various characters' perspectives and perhaps has a feeling of not being as consistent as the others I've read. And the ending is rather sudden and/or anticlimactic. Still, definitely worth a read for its absurdist essence and strong evocation of a particular cultural moment. Since this is the UK translation, I did notice some word choices that stuck out as odd -- perhaps the American edition will solve that issue for American readers. In any case, I enjoyed it, and Kurkov is still on my must-read list. Glad to see that he is getting wider distribution as I think he has a distinctive voice that is well worth sharing.
Posted by Melwyk at 3/17/2012 03:54:00 pm