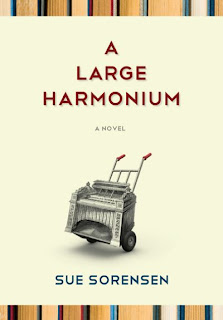 This is a light, breezy story of an academic in Winnipeg who has a charming husband, a sex life of rabbit-like regularity, a precocious two year old called Little Max, a career crisis, and an acerbic wit when it comes to literature.

It's fun reading, despite the life crisis that Janey endures. She experiences a regular depression each year at the same time, following the academic calendar. This year, she also has a friendly minister to counsel her through the depths.

She's the Bridget Jones-like main character who is surrounded by fellow academics -- all women, all of whom she seems to have prickly relationships with. She also has to deal with her astonishingly good natured and well adjusted husband's best friend Jam (one of those men who never wants to grow up), and his annoying parents who drop in for a visit unexpectedly. She seems to be a bit of a mess, although I can't really see why. She has a great husband, a civilized job, a young healthy child, an apparently active sex life, someone to confide in.... oh well, I suppose it is just her character, overthinking everything and stressing out about perfection.

The story takes us through the year, with obnoxiously funny asides as to the literary worth of the Brontes, or the character her husband should be if they were literary characters.("Rochester! Why should I be Rochester? He's a bastard.") Right from the first line it's evident that this book is going to be full of literary nods: "I say I will buy the Jiffy Markers myself."

I enjoyed all the references to art and books -- even the over the top comparisons Janey makes ("I am reading my way through the novels of Charlotte Brontë, mostly, I think, so I can feel superior to her.") They show Janey's own obliviousness and insecurities. When she can stop being so flippant and take herself seriously for a minute, and open herself to some self awareness, she does understand that her life is pretty grand as it is. The most serious moments in the book come when she is speaking to her minister and he is helping her see the source of her neurotic beliefs.

Her husband Hector, a music professor, has his own events to deal with -- politicking in the music department, or the accidental fatherhood of his best friend, for example. But he is definitely a partner in Janey's life, and one who seems extraordinarily patient and present for her. Their child, though, comes across as a bit of a cipher. He's there to serve a purpose, but doesn't feel like a character in his own right, to me.

The title, seemingly odd at first glance, is referenced near the end, when Hector and Janey are practicing a piece he's written. Janey comments:

"I liked the sound of the harmonium, the other day... It sanctifies the story somehow, makes it more understandable. But it doesn't sound too solemn. I guess it really is a small organ, isn't it? I never thought of it that way before."

An unusual tale that had its merits, though I felt a lack of complexity in the main character. The relationship between Janey and Hector felt a bit twee from time to time, but otherwise, they were a novel couple. It was a good read, one in which I most enjoyed the many references to other literary, musical and artistic work.