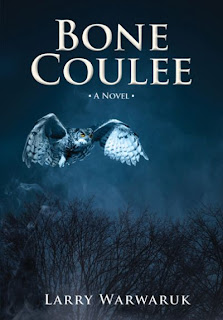 This contemporary novel set in South Saskatchewan plays with the past and its secrets. Mac Chorniak, a farmer of Ukrainian descent, faces the arrival of two new neighbours in their small town: a young Aboriginal woman and her mother. Unknown to him, the mother Roseanna is the sister of a man murdered years before by Mac's group of four friends in a teenage brawl, and she's determined to make him pay.

The cover is a beautiful one which illustrates the belief of Roseanna's own grandmother, that an owl flying overhead at night is a bad omen: a belief borne out by its happening the night Thomas was killed.

The interplay of secrets, past and present, and the question of cultural identities, informs this book. The multicultural nature of Canadian society, even in a very small Saskatchewan town, is part of the storyline. What is Native land, who decides on Native rights, and what does it mean to be a hyphenated Canadian? Mac explains in a tv interview at one point in the story that:

"I've lost what little of the language I knew. Once the language is gone, everything's gone but the Easter eggs, if you have a wife or daughter who will paint them. You dig for roots when the stem has shrivelled and died. My years of trying not to be Ukrainian have made me nearly as English as Abner."

But while the questions this book explores are both serious and multitudinous, I'm not sure whether it is too local for a wider audience. Saskatchewan places, political parties and personages (as well as provincial scandals), artists and musicians are continually named throughout the tale (and it was a bit of a shock to my suspension of disbelief when near the end I read the name of real musician Andrea Menard as a performer in a big show being put on at Bone Coulee: a shock to me because I went to high school with her and it was just weird to see her name there! ) It's fun in one way to check off the familiar names and events, but in another, I'm not sure non-Saskatchewanians would enjoy it in the same way.

The themes of each chapter, and the characters, are widely representative of rural Saskatchewan, and many rural concerns are discussed. Hunting, land rights, people from Toronto, historical artifacts (and who they belong to), Natives and racism, the roles of men and women, are just some of the topics playing a part in this book. Unfortunately for me as a reader, much of the male conversation in the local diner frustrated and irritated me -- perhaps I found it had too much verisimilitude!

So while I appreciated what Warwaruk was doing (and really liked the Ukrainian elements and the references to the poetry of Shevchenko) this wasn't a read I really cherished. I liked it, but found it a little issue-heavy. Some of the scenes were vivid and memorable, while others seemed to just keep the story going. It was interesting, and a vision of a place I've haven't seen that much in Canadian fiction -- multicultural, modern Western life.