To This Cedar Fountain 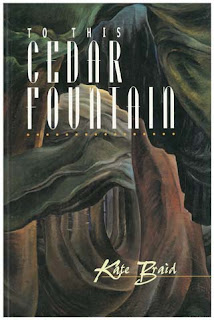 This was a serendipitous discovery for me, and I'm not sure why I've never heard of it before! It's too bad that this is now out-of-print. It's a deeply felt poetic Canadian response to a Canadian artist.

It's a collection of poetry which is a response to and a dialogue with Emily Carr. I hope that everyone knows about the artist and writer Emily Carr -- she is an amazing Canadian painter who I absolutely love. She also wrote a number of books in her later life which are just as wonderful as her painting. She was fiercely independent and original, despite both opposition and indifference from the art world in her era.

She wrote something that has become one of my very favourite quotes:

It's clear that poet Kate Braid is similarly enthralled by Emily Carr. This collection of poetry takes inspiration from Emily's art -- most of the poems are named after a painting, and one of them is a found poem from Emily's published journals. There are a few coloured prints of some of the works which Braid is responding to, which is nice. And each poem is faced with a quote from Emily's writings -- either something that Braid is responding to directly, or a few lines which illuminate Emily's thoughts about the painting that is the subject of the poem. It works wonderfully, and Braid's own experience working with her hands (she's a carpenter) shows in her understanding of Emily's struggles and inspirations. I think there is a resonance between Emily's love of the living forest and Braid's familiarity with wood as well. There's a connection that you can feel between these two artists. In fact, in one poem called "Wood Interior", Braid finishes with these lines:

Now I know who you are.
Another woman who knows wood.

Once I read this I looked further into Braid's work, and she has written another book of poetry inspired by Emily Carr and Georgia O'Keefe. She's also written a juvenile biography of Carr for a Canadian series. So the sense of connection obviously continued!

I enjoyed the earthiness of these poems: the physical connection to nature that Emily's paintings reveal is highlighted in some of the poems. Braid also draws out the feeling of isolation and loneliness that Carr's writings reveal; she had a hard life going her own way. The poems express Braid's thoughts about each painting -- sometimes a description of her own viewing of it, sometimes a look at the feelings Emily is trying to express through an image. There is a combination of two poems at the centre of the book which are marvellous: the first, a found poem directly out of Carr's work, and the second a glosa which uses some of the lines from the found poem to create an intimate dialogue with Emily's writing.

This book feels like an artistic collaboration between the two: the tone and the interaction between the words of both writers are at exactly the right pitch. I really enjoyed this book and Braid's interpretation of her experience of each painting. This book is a lovely idea that is wonderfully executed. Now to go see another Emily Carr exhibition....

Polestar Book Publishers was bought out by Raincoast in 2000, then disbanded when Raincoast decided that they were no longer publishing Canadian works, rather sticking to distribution and repackaging. Farewell, Polestar.