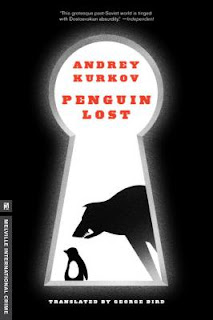 This is the follow up to Kurkov's first novel about Misha the penguin, Death and the Penguin. I read and enjoyed that book a while ago now, and was eager to get to this one, which I ended up reading via Netgalley.

I enjoyed it a lot, though it had a different feel than the first: for one thing, Misha is "offscreen" a lot of the time (thus the title) and I missed his silent seriousness. In this book, Viktor Zolotaryov has returned from his Antarctic exile where we left him at the close of Death and the Penguin. Conveniently he has also come into a lot of money so off he goes back to Kyiv, where he finds his foster daughter Sonya and her adult companion Nina living in his apartment with a new man. He wanders around Kyiv, gets involved with a young prostitute, falls into a handy job writing for a politician wanting re-election (which comes with room and board), then heads off to Chechnya to find Misha -- rumour has it that Misha was last seen there, in the midst of the conflict.

There is a lot of action in this tale, unlike the first one which felt melancholy, stolid and full of Soviet resignation. Viktor travels around outside of Kyiv for most of the tale -- from Antarctica to Moscow to Chechnya and eventually to South America. Actually, it reminds me a lot of another of Kurkov's books that I've recently read, The Case of the General's Thumb, with all the farcical coming and going and a full cast of eccentric bad guys.

Still, once Viktor arrives in Chechnya he ends up working at a makeshift crematorium in the woods and things get pretty dark and serious. He patiently waits for this newest trial to pass so that he can contact Misha's last known owner, a mobster. Eventually he does find Misha, living in a dog enclosure with protective huskies.

From then on there is a lot more complicated finagling to get Misha back to Kyiv with him -- and eventually to get them both out of Kyiv altogether. While parts of this scheme were pretty amusing, it was awfully convenient to have a beautiful young woman decide to marry him and take him along on a sea journey to South America. Still, this led to the poignant ending in which Misha finally finds freedom. I admit I got a bit teary saying goodbye to Misha at the end. Viktor I could take or leave, but Misha was truly endearing.

I've been waiting to read this book for a couple of years now, so took my time and reacquainted myself with the characters slowly. Even with the different feel to this book I really enjoyed it and was glad to find out more about Viktor's progress and miraculous survival! There was a lot of broad humour to be found in this one and I found it entertaining. Though the first book was deeper and felt more "Literary", this was a fine follow-up that I still liked a lot. Misha was the symbol of Viktor's search for meaning and connection, and it seemed that Viktor was only able to let his responsibility to his penguin go once he had forged a new life outside of Ukraine. Interesting conversations about nationality, one's place in the world, and responsibility to others could ensue if you decided to discuss this one over drinks! I really like Kurkov's writing and find lots to think about even in his lighter novels. This one, having Misha in it, was of automatic interest and lived up to my expectations. Definitely one I'd reread someday.