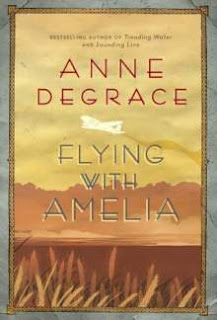 I've read all of De Grace's books and I really like her style. This novel follows in the tradition of her earlier ones, in that it is a collection of linked short stories. But this one is very ambitious: it attempts to tell us a story of Canada throughout the 20th century. It works beautifully.

It opens with "Across the Atlantic" (1847), in which an Irish family makes its way to Canada in the cramped hold of a ship, where lack of food and sanitation lead to a number of deaths. It is this family which begins the tale, and descendants pop up in later stories. While it is not a straightforward narrative following one family, part of the fun is recognizing the connections between earlier stories, the references to the locations and family members which influence later characters.

Stories take place all across Canada, from the East Coast where immigrants arrive, to the West Coast and all points in between, including North. One of the stories that I found most enthralling was the title story, presented mostly as letters between a woman from Nova Scotia and a man from Saskatchewan, befriending one another, sharing recipes, sending gifts, and eventually agreeing to meet halfway, in Ottawa. It's set right around 1934 and the On to Ottawa Trek, and as soon as I realized this I began to get anxious. (pitfalls to studying history!) It was so well done, though.

Each of the stories had a character who would catch your interest and prove memorable. I can think of most of the storylines immediately; young William, who meets Marconi -- newspaperman Murphy and rich Helen, in 1929 -- James, Fig & Myra in the draft dodger era -- the Millennium and a marriage at the point of collapse --it goes on and on. Each tale was a treat. I really enjoy DeGrace's narrative voice, and perhaps because I was a history major, I love the examination of each era from a micro-history point of view, from the perspective of one person's or family's life. The book finishes off -- very satisfactorily brought full circle --by the story "Across the Atlantic" (2012) It shows the descendants of the original family traveling back across the Atlantic, in the opposite direction, in search of their roots. Lovely thought.

This book as a whole has a great sense of breadth; the expanse of the country and the spread of historical moments over many years is expressed very well. DeGrace chooses smaller historical moments so that the story she is trying to tell isn't overwhelmed by pre-knowledge or overly familiar settings. In this way, I thought that each era was portrayed as a living and breathing present experience, no "heritage moments" to be found. There is a feeling of respect for all the varied people and the small everyday lives that have made up our history, and this feeling illuminates the entire book. I really appreciated this read, and savoured it slowly. Definitely recommended to my fellow Canadians (especially for Xmas gifts - great for those readers who may hesitate to pick up longer novels) or to anyone intrigued by historical fiction and/or the linked short story. Excellent read.

For this year's Canadian Book Challenge I've chosen as my theme "Small-Press-Palooza" Thus, for each book I'm including a link to the small press who has published it. Take a look -- there are wonderful small presses all over Canada! I know McArthur & Co isn't exactly "small press" but they are not a subsidiary of any of the "big three" so I am counting them :)
Posted by Melwyk at 12/14/2011 09:52:00 pm