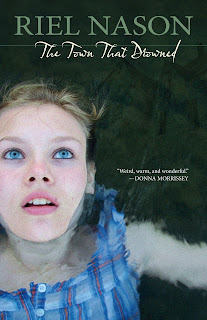 Set in New Brunswick in the 60's, this is a tale of a town which was displaced when a large hydroelectric project flooded the original townsite. This has happened in many places, and in fact this book is inspired by a true story.

However, the tale is fictional, and features Ruby Carson, a teenager who contends with a little brother who probably has autism or Asperger's -- it's never clearly stated but his behaviours suggest it. Along with his original personality, Ruby is also a pariah at school because of her experience at a community skating party: she fell through the ice and while being rescued was babbling about a vision she had of the entire town under water.

She wonders if perhaps she could have been psychic once the news breaks about the new dam. Projects like that don't happen overnight, though, and Ruby has nearly two years to tell us all about how the prospect of the town being moved higher up onto a new, evenly graded plot affects everyone. There is drama, discord, some very threatening behaviour by a couple of the town idiots, people leaving for good, and some who seem pleased to be getting a new house by any means. Ruby develops friendships, and a sweet romance with a boy from Ontario whose father is in town buying up family antiques as everyone tries to get rid of most of their 'stuff' in preparation for the big move.

Ruby's brother Percy has his routines, and her family revolves around most of them. He is portrayed as simply the person that he is within the family, though; it doesn't seem as if he is a terrible burden, just the reality of the Carson home. This is definitely Ruby's story, and while Percy has a big role he doesn't take over the entire narrative.

I found the description of her family and the long-time neighbours and friends quite satisfying. Nason is able to give individuality to each of the characters, so that they seem like real people who are still living "offstage" when you're not reading about them. The interactions are realistic -- tense, prickly and anxious about the news, everyone has a certain edge even with those in their own families, but this doesn't mean they become enemies. It's a community facing a major challenge, and there are only a few opportunists among them.

Because of the era in which it is set, there is also a kind of innocence to Ruby's narration. Every move of the provincial government and its agents is not being watched on tv or tracked on the internet. It just unfolds at its own pace. The story brings up questions of communication -- how much is owed to civilians? Which of your friends is telling the truth about how much they knew beforehand? Are people acting in good faith? And of course, from our current vantage point there are also environmental results to a project like this, though they weren't much of an issue in this book.

In any case, it was a situation that lent itself to a fictional treatment, and I thought that Nason did a great job describing all the varied reactions and illuminating the changes that this project brought to the town. While this wasn't published as a YA novel, it has the strong sense of one to me -- Ruby is coming of age in an unsettling time, and ends up with a boyfriend and an eventual smooth ending to the tale despite the upsetting events of the narrative. I think it would strongly appeal to YA readers as well.

To get a flavour of the story, you can read an excerpt here thanks to the publisher.

Have you read any other books about drowned towns? If so, please share suggestions in the comments! I've also read Treading Water by Anne de Grace, about a town in BC, and enjoyed that one.