To Join the Lost 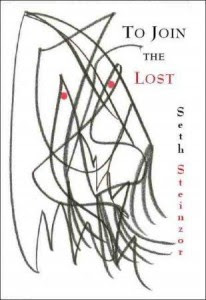 I was offered this book through TLC Book Tours, and was instantly intrigued: Dante's Inferno told from a modern perspective? Narrative verse? Yes, please. Even though I am not intimately familiar with Dante's original, I know enough of it to have this book appeal to me.

And I did enjoy it, overall. Steinzor is a lawyer, and his experience in law illuminates his trip through Dante's circles of hell -- with Dante himself as his guide. (To get a clearer idea of how his law career informed his writing, you can check out a recent interview with Serena of Savvy Verse and Wit). I read this over a week or two, taking my time, and found that certain images and phrases resonated with me. I was most taken with a section near the beginning, one that many other reviewers on the blog tour have mentioned as a high point:

Eternity, therefore, is like an ocean with currents
that swarm and braid and branch and carry
many riders. Like you, each is bound for where he's
going and thinks there's nowhere else.

Or see it this way: when you were a child,
and maybe many times since then,
it delighted you to stand beside an
an unruffled pond and pick out pebbles, the
flatter the better. One by one you'd fling them
skillfully, sidearm, snapping your wrist and
proudly counting the hops. That flat little pebble's the
world of your daily awareness. The pond is
everything else. You fly, you skim, you leap,
you skim that chilly otherness,

you leap a little shorter, skim again.
Every contact slows you and
propels undeviating flight to the next,
a little closer than the last.....

The middle of the book sagged for me, unfortunately: there was a lot of reference to American politicians of varying levels, most of whom I was completely unfamiliar with and thus was unable to grasp any nuance in the references. I also found that the first third or so of the book was broader, with a more philosophical bent in which widely applicable images and ideas like the one quoted above appear. It was a great idea, and the end leaves us waiting to find out what happens next...after the promotional film and gift shop in Satan's headquarters! Steinzor is brave to take on Dante, and I think it works for the most part. Most people I know would never pick up Dante's work, but they may take a peek at this, feeling less intimidated, and be inspired to try the original as well. I know that I'm now putting the original back on my TBR list.

I enjoyed the flashes of humour in the book, mainly wry asides, and the moments of pathos, as when the narrator discovers his grandfather in hell. While I didn't always agree with Steinzor's judgement of who belonged in hell, I was mostly in agreement, with a few exceptions ;) I appreciated his appraisal of many tyrants -- aside from the obvious Hitler, he includes many who were similarly evil even if not a synonym for it in the way that Hitler is. I particularly noted his mention of Stalin and the Holodomor, which is always in my mind, as a person of Ukrainian descent.

I liked the rhythms of it, how the narrative really did carry us through the verse effortlessly. I also enjoyed the fact that the narrator's guide through hell is Dante himself, leading to lots of self-referential asides. Some of the images were pretty grotesque while others were simply dreary and sad. It was a suitably nightmarish setting, and seemed overhung with a dark, shadowy fog. I can't really imagine hell as a chipper, sunny place, so this worked perfectly for my imagination!

If you're already a fan of the original, you may find this an interesting take on it from a modern, though very American, perspective. It's curious to find a modern Jewish-Buddhist visiting a Christian hell, but then, hell is what we make it, isn't it?

Thank you to the author and TLC Book Tours for sending me this review copy.