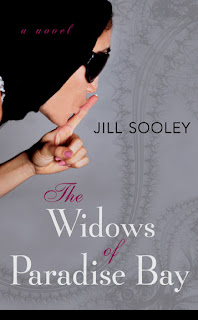 The Widows of Paradise Bay / Jill Sooley
St. John's, NL: Breakwater Books, c2010.
253 p.
I had a lot of fun reading this book -- it kept me going in the wee hours of last week's Readathon, with its funny take on a macabre situation: early widowhood.

It's set in Paradise Bay, Newfoundland, where the main character Prissy Montgomery retreats to lick her wounds when her husband, Howard, admits he's been having an affair. Prissy's mother thinks that admitting to a divorce would be too much shame for Prissy to bear, so takes out an obituary notice in the local paper announcing that Howard is dead. This leads to obvious complications, especially when Howard shows up in town after their son gets into some trouble with the law.
Alongside Prissy's story, though, there is a more sober story of Georgia, a local woman who has been in deep mourning for five years after the sudden loss of her husband and soul mate. Her struggles to deal with her emotional trauma and vast loneliness come into focus as she decides to set up a kind of support group for Prissy and Lottie, another local woman who has just been widowed. This foray into community begins her healing process.

As for Lottie, the third widow, she has the most complicated emotional situation. She is widowed during the narrative, as her depressed husband commits suicide. Not only does she have the fact of suddenly being alone to cope with, she also has the fallout from the stigma of suicide, and the deeply hidden truth that she actually didn't care much for her husband at all. Georgia's attempt at starting a local support group takes fire in Lottie's mind and she becomes, suddenly, the woman she always had the potential to be. She networks, finds support, and pushes for a government grant to set up a provincial organization to help widows across Newfoundland, calling it WHOW. (Widows Helping Other Widows). Each of the characters is young, in her thirties, and this adds to the pathos of their situation. These women are not young mid-thirties party girls, rather two of them are mothers of teens already and they are all living normal, everyday adult lives.
The three stories intertwine and each person is interesting in their own way. I found that I actually liked the main character least, although her mother was wonderful. Her brother, who liberally uses the word "fuck" and its many permutations as a noun, verb, adjective, and any other kind of speech possible, was an engaging side character and gently amusing despite the fondness for expletive. Prissy was a good character, but Georgia's fragility and Lottie's stolid forbearance drew me in a little more.

I wouldn't say this was perfect; there was some reliance on broad strokes in the characterizations, and of course with three storylines it became a bit uneven, but I really enjoyed reading it. It was a fun tale and unlike other Newfoundland books I've read there was precious little about fishing or history in this one, rather, it was a modern and funny story of three women facing up to the hard moments in their lives and carving out support through friendship, even with all its difficulties. It wasn't light subject matter, covering loss, death and betrayal, but was told with a light hand. It amused, and ended happily. A perfect summer read.