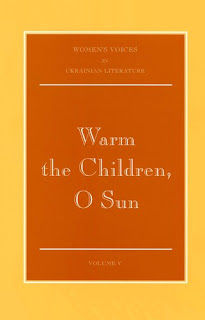 This is the fifth volume in a unique series called "Women's Voices in Ukrainian Literature". It compiles short stories on the theme of childhood and adolescence by a varied group of Ukrainian writers, most of whom were writing in the years between the late 19th and early 20th century. (for bios on each of the writers, check the Language Lanterns site; they share a lot of great information there). The brief biographies of each of the writers are also included in the book.

It's a good book to follow my last read, as it focuses on women and girls' lives in mostly peasant families, in 19th century Ukraine. And it makes me very glad I don't live then. Their lives are unrelenting work...childcare, food growing and preparation, housekeeping, submitting to their (often drunken) husbands and so on. One story delves into the cultural expectation of early marriage and how these lovely young girls, so finely dressed, expect only marriage in their lives -- and then are utterly disillusioned and realize they were only really free before marriage but now it's too late and they keep encouraging other young girls and their own daughters to get married asap.

In one tale, a husband is considered a gentle man and a good catch because he only beats his wife once a month. In another, all the local girls mock another, who is a frail and indulged only child, because she can read. They are merciless in pointing out the ridiculous nature of that talent and how it will make her unfit for a good marriage. (fortunately she finds a husband who, when he discovers her talent, is amazed and happy, as he is himself illiterate -- it is the only 'good' marriage in the entire book).

The strength of one girl who is determined to become a dancer, in one story, highlights the way that most people stayed put, never leaving even their villages; she makes a shocking escape by faking her own death, and travels Europe as a famous performer. She is perfectly safe because the people of her childhood home are so isolated and insular they'd never know it. Just the narrator moves between worlds.

I love reading this series because of the continual surprises. My expectations are always being challenged and changed when I read these stories -- I think I know what their lives were like but reading contemporaneous accounts, though fictional, reveals things that were taken for granted by the society in which these tales were written. The class structure is quite startling, and to me reveals a lot about the reasons for the patterns of immigration to places like Canada.

Not all of the stories are at the same literary level; the series points out that they are translating these previously untranslated works for the social importance as much as the literary. All the contributing authors worked as writers, but some (like Olena Pchilka) have much more of a literary profile. Of all the books in this series that I've read so far, I found this one to be a tough go -- mainly because it is unrelenting on the limited options for girls in this time and place. The story about the reading girl (entitled "She's Literate!") touched a nerve; and the constant reminder through most of the stories that wives were generally considered necessary evils and shrewish, and beaten regularly, was quite dispiriting. The whole book tied the theme of poverty and misery together rather effectively, however, and is certainly an important collection. I am once again impressed and grateful to Language Lanterns for undertaking this translation project on.
Posted by Melwyk at 5/26/2011 08:48:00 am