Last Days of the Lacuna Cabal 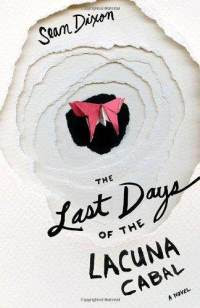 I read the American version of this, oddly enough; the original Canadian version is entitled The Girls who Saw Everything, published by Coach House Books. But, I loved it, no matter what title it is going by. (this cover is the copy I read, but you can take a look at all the various covers/editions at the book's blog)

The basic story (and it's hard to say basic as it is a wildly inventive, crazy book) is that there is a group of women in Montreal who've started the Lacuna Cabal Montreal Young Women's Book Club. They read and then enact the stories they're reading. As we begin this book, they've come to a bit of a crisis point: it's time to decide on their next read, which, unbeknownst to them, turns out to be their last.

Due to the insistence of member Runner Coghill (and her little brother Neil) they begin reading The Epic of Gilgamesh -- from the original Sumerian tablets, which are apparently a Coghill family treasure, ten clay tablets in cuneiform which Neil carts around in his backpack. There are obvious issues to re-enacting Gilgamesh, firstly that there are no boys in the book club. Though various circuitous occurrences, they enlist two 'boys', Dumuzi and Coby, and the action spirals from there.

The delightful nature of this book lies in its references to other books they've read (nearly all Canadian, nice touch) and to the tangled interpersonal relations of the Lacuna Cabal. It is made up of seven women and the gender-nonspecific Aline, a crossdresser who is considering gender reassignment surgery. The narrative structure is amusing; two of the members are self-consciously narrating the tale and noting that they know they can't know what others were thinking or doing when they weren't there, but they are going to fill in the blanks anyhow. It was entertaining and had a few points that are ripe for discussion in a real book club!

It's too difficult to summarize -- so just noting what I really enjoyed about it, I'd say the marvellous, evocative Montreal setting (great job on that) -- the personalities -- the off-the-wall action, especially as Neil stows away on a ship he thinks is headed to Owen Sound but ends up in the Persian Gulf (this is during the Iraqi war) -- the side characters, including the Baghdad Blogger and a Bahrain policeman --and finally, the fact that this book full of hip humour and literary cleverness also has an emotional heart.

Runner and Neil are the centre of the book; the Epic belongs to them, they spur the action. But they also inhabit the story in a deep way, as Runner's twin Ruby has recently died, and like the Sumerian goddess Inanna, Runner longs to join her sister in the underworld. Her journey, and by extension, Neil's journey to belonging in a wider world, engages the reader and provides a serious foundation for a story that may appear at first glance to be tossed off lightly.

After a bit of a slow start, I found my stride and then couldn't stop. I loved the second half of the book, especially, and found the unpredictable conclusion satisfying and a perfect finish. It was an adventure of a read.

Sean Dixon is a playwright, novelist and actor. His plays have been produced in Canada, the U.S., Australia and the U.K., and 3 have been collected in AWOL: Three Plays for Theatre SKAM. Sean’s first novel was The Girls Who Saw Everything (The Last Days of the Lacuna Cabal in the U.S. and the U.K.), named one of the Best Books of 2007 by Quill & Quire. He is the author of 2 books for young readers, The Feathered Cloak and The Winter Drey.
Posted by Melwyk at 5/27/2011 02:00:00 pm