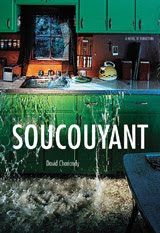 This was an unusual book that I've been meaning to read for ages, ever since it arrived at my library and I saw this stunning cover. It's perfect for the story, almost as if it was created by the designers immediately after reading this book! I loved the fact that the cover is an original photograph by the (very dark) visual artists The Sanchez Brothers, rather than duplicated stock photography.

The story is about a family which has immigrated to Canada from the Caribbean - specifically about the younger son and his relationship with his mother, who has suffered from increasing dementia over many years. The title comes from the Caribbean belief in the soucouyant: a vampire like creature, who appears as an old woman during the day but by night sheds her skin and becomes a ball of fire, and can travel into people's homes while they sleep in order to suck their blood. The story circles around the vague memory that Adele, the mother, seems to have of the time she saw a soucouyant, until near the end we discover what trauma she experienced in her youth that is being reexperienced as this memory.

The narrator, whose name we never learn, is the younger of two sons. After his father dies and his older brother abandons them for his own dreams of a poet's life, our narrator becomes overwhelmed. He leaves home, leaving his mother to the vagaries of chance. After two years, he comes home, to find a woman who he believes is a nurse living in the family home, caring for his mother.

This book was full of poetic, ruminative passages, as well as contrasting, sharply drawn moments. I copied out a few paragraphs about memory, about the way a homeland and a past can creep into the present and colour the next generation's lives as well. The setting and Adele's life are both drawn beautifully and the story carries you forward effortlessly. Elements of the book, such as the racism both Adele and her future husband experience as new immigrants to Toronto, were shocking. It seemed so severe, so very limiting, and I was shaken into the realization that it was really not so long ago that these kind of attitudes were common. The flashbacks to Adele's childhood were quite moving as well, and the slightly textbookish add-ins about the history of her homeland Trinidad was a necessary addition to the text for those readers who wouldn't have been able to understand the nuances (like me!)

But, there were some flaws that bothered me also. Primarily, I wondered how this woman, so clearly and debilitatingly a dementia sufferer, had been left to her own devices for so long. The neighbours didn't seem to do much except criticize the family; but if they were so concerned with the neighbourhood surely one of them would have called social services once Adele was abandoned and on her own? Also, the ending comes quickly and there are some threads that get neatly wrapped up a little too easily -- with some predictable yet ultimately avoidable situations.

Nonetheless, this is a moving and original book, well deserving of all of the award nominations it has garnered. I found it a quick read but it has stuck with me over the past couple of weeks since I finished it. The characters are complicated and contradictory, and very memorable. Really interesting read. 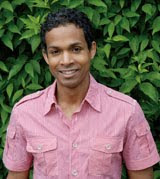 David Chariandy lives in Vancouver and teaches in the Department of English at Simon Fraser University. His novel Soucouyant has received great attention, including a Governor General's Literary Award nomination for Fiction, a Gold Independent Publisher Award for Best Novel, and the Scotiabank Giller Prize longlist.