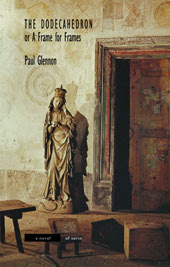 A suitable book with which to begin a new year full of bookish talk and reviews, The Dodecahedron is all about books, text, and the elusive nature of written truth. It is a collection of twelve stories which, while not linked in a traditional manner, do refer to one another as narratives. It begins with a tale of a young boy who literally eats his father's library page by page to keep it from an unnamed but menacing SS style of police force. There are stories of a monastery up in the edges of the Arctic Circle who spend the months of dark dreaming and the months of daylight creating manuscripts filled with their dreams and visions of alternate history. And there are many other creative and fascinating characters and situations -- a collector of messages in bottles, a polygamist, a lost Arctic explorer, and many others. One thing I did notice however, is that the stories are all very male, with men as the main characters and quite a masculine feel to the text. And perhaps the style of the narrative is also quite male, in that there are arbitrary limits set which shape the structure of the book -- this is something I think male authors find more appealing, generally.

Glennon set his own limits on his "novel of sorts" by following Oulipian principles (OuLiPo is a group of mostly French authors who create literature based on arbitrary constraints of their own making). Glennon explains these principles in the book’s afterword:

Each chapter was to be as self-contained and whole as any short story. As in a story cycle, each story would cast a new light on the ones that preceded it, and promote a novel-like unity of themes. What I did not want to write was a cyclical book, in which the final story is the final word, a story with more authority than all others, one that casts a sort of judgment on the rest ... I envisioned a book in which each of the twelve chapters or stories represented a face of the dodecahedron ... In A Frame for Frames these sides represent a relationship to an adjacent story…Each story must refer to or be referred to by each of the five stories adjacent to it.
I'm not sure about all the literary principles, but Glennon certainly succeeded in making each story equally authoritative. Even after reading them all and then going back to a couple of them for a second look, it is never hinted anywhere that one or any of the stories is the final authority on what to believe about all these linked narratives. It's a wonderful read for that reason, even if I did have favourites --and not so favourites -- among the stories. But, because it is so self-consciously literary, with the dense interrelated stories spiraling off into mind-bending directions at times, I did have to read it quite slowly. One story, put it down and think, then another the next day.
It was an intriguing read, certainly, and one a bookish reader may enjoy. 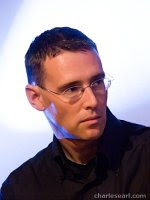 Paul Glennon, born in England but resident in Ottawa since 1975, has been published in Descant, Matrix, Canadian Fiction Magazine, and the Blue Penny Quarterly. He has an MA from the University of Ottawa and currently works in the software industry. He also has a young adult series on the go.
Posted by Melwyk at 1/04/2011 08:03:00 pm