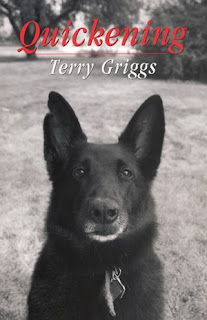 This is the first short story collection I've finished in 2010 - and it was overall quite an enjoyable discovery! Griggs has a style which, as she puts it, "can be somewhat textured or layered, what a friend once described as a 'thicket' ... Another friend has described these stories as 'wide tales' as opposed to tall ones, and that nicely covers the stretch in them. I've always been a bit of a fantasist, wanting to let in what lurks on the edges of vision, just beyond view". Her style is definitely more playful, linguistically, than many stories I've read lately which seem to believe in the Hemingway approach to literature - the fewer words the better. Let's just say that I am not a big Hemingway fan.

This is a grouping of stories first published in 1990, and republished by Biblioasis in 2009. This new edition has an extra story added in for good measure. It shows the range and variety of Griggs' tales, full of strange happenings and odd characters, told from a variety of perspectives, most with a sense of the unknown hovering atmospherically. They are entertaining and full of clever wordplay, and some move so quickly that it feels as if the narrator is not going to pause for breath.

There are 17 stories in this collection, each fairly short. Several of them revolve around a family of females, and each has its own distinctive strangeness - in one, a baby girl is christened Michael Gabriel rather than given the name of any of her great-aunts, who all disapprove, and she must then live up to her unusual name. In another, four daughters are left an inheritance of a hotel each, the style of the hotel -- from elegant to a haunted dive -- matching each of their personalities. In the final story, Tag, a reserved woman who both loves and hates her flamboyant, demanding sister (who is fatally attracted to dangerous living and dangerous men) has to deal with the sudden disappearance of said sister. The slightly dimwitted boyfriend is under suspicion and is brought in to the police station for questioning. The investigator has found what he thinks is damning evidence at boyfriend Romeo's apartment:

Thatcher held out a tattered object and shook it vigorously at Romeo. "Just how do you explain this?"

It was a child's library book.

"The Runaway Bunny!" Romeo was thrilled. "Ok, right... uuh well, it's about the transforming power of love, and, ahhh, on the other hand, it's about how you can never escape your mother, you see --"

"What I mean, Dorkhead, is that it's twenty years overdue."

"Yeah? Gee, guess I forgot to return it."

He forgot. Sure. Thatcher knew the type. They broke spines, they dog-eared pages, they scribbled obscene comments in the margins and squashed bugs between the covers, they branded the text with coffee rings, flicked ashes in the binding, wiped freshly excavated ear wax on the end papers, used rusty bobby pins and strips of bacon for bookmarks. Small potatoes, he realized, petty vandalism, but not unconnected to greater offenses. Thatcher had a panoramic vision when it came to crime, a comprehensive view that took in the roots of evil as well as the fruit. All thanks to the firm, guiding hand of his mother, a long-suffering librarian who filled him in like the empty pages of a notepad, sparing no detail. A child who forgets to return a library book, she had warned, may well grow up to be the kind of person who "forgets" to take a knife out of someone's back. Thatcher understood that Romeo was guilty wholesale, guilty in a universal sense if not specifically in this case, because felony was his medium, his oeuvre.

This is, of course, an irresistible appearance of occupational humour -- how could I not appreciate that scene? But there are other moments in other stories which are equally amusing, and then there are some moments which are quite beautifully rendered. The sadness which a middle aged woman feels when her young lover disappears is sketched out in a line or two, but hits hard. There is a real sense that the world is full of things unknown or unseen, and a few of those things make their appearance in these stories.
It was a good collection to muse over while I had time off, taking Mavis Gallant's advice to read a story, put down the book and read something else, then go back to the next. Story collections are not novels, and there needs to be time to appreciate each story independently; in this case, the ornate storytelling certainly benefited from that spaciousness of time -- as I thought back on each story, new angles and images arose. It was a thought provoking and rewarding find.
Posted by Melwyk at 1/09/2010 07:42:00 pm