The Blythes are Quoted 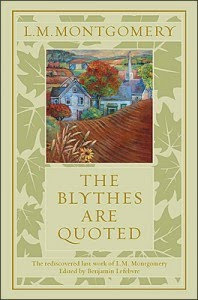 The Blythes are Quoted / Lucy Maud Montgomery; edited and with an afterword by Benjamin Lefebvre
Toronto: Viking Canada, 2009.

This is the restored, full version of a collection first published in 1974 as The Road to Yesterday. That version was expurgated, removing some of the darker elements of the stories, and all of the poems and dialogues which Montgomery had inserted between sets of stories. Anything new by LMM is exciting to me, and I was eager to read this.
I loved it; it was such a delight to be discovering something new in her voice - now I want to go back and read all her novels again, starting with the Anne series. The title comes from the fact that all of the short stories have some reference to the Blythe family; what they will think of the action, their children's behaviour, the good Dr. Blythe's advice, and so on. Everybody seems to know them! There is poetry between the short stories which is attributed to Anne Blythe, with some of it presented as her son Walter's as well. I really enjoyed the poetry interspersed with the stories in this book; a lot of LMM's poetry is very old fashioned; rhyming, full of overblown descriptions of nature and so on. But in this book we see some of her later poetry, and while it is still formal (she despised free verse) there are a couple of very touching pieces which break free from the adoration of nature and the sentimentality which characterizes much of her poetry. Perhaps it was just her changing outlook; in one of the stories a character says that believing all children are equally lovable is "sentimental piffle". Along with the poetry we have short dialogues from the family (and Susan Baker!) responding to the poems and referencing occasions from the past, which readers of the series will recollect from earlier books.
A couple of the stories really are very dark, for example we have a woman avenging her illegitimate daughter by murdering the daughter's abusive husband -- and no one knows that the faded older woman is both the birth mother and the murderer. Even more scandalous, she shows no shame when admitting it on her deathbed. Another story is amusing, if a bit risqué, as a man seeks out the woman he believes he loved when a young man, neglecting his own wife to do so (she was only his second choice after all). He gets his comeuppance when the youthful crush turns out to be bonkers and drives him madly around the countryside, in his pyjamas. Okay, it really was quite funny. There are shades of spiritualism, thwarted love, illicit affairs, cruelty to children and wives, all sorts of things one wouldn't associate with the author of Anne of Green Gables. Of course, if you've read the recent biography, The Gift of Wings, or any of LMM's journals, that darkness won't really surprise you.
But there is also a sad echo of Lucy Maud Montgomery's own troubles during WWI; the book is arranged so the first half is prewar and the second postwar. There are poems by Walter Blythe included, and as fans of the Anne series know, this is the romantic, literary son who dies in the war. There are family dialogues following the poems, and in these the sense of loss and sorrow is clear. LMM had extreme difficulty dealing with the tragedies of war, and the final poem in this book reflects a sense of the futility of war. The manuscript was apparently delivered to her publisher the day she died, in 1942. I wonder what part her view of the war which was then underway played in the themes of this book. It is a sad, powerful, fascinating and priceless restoration of the complete work that LMM originally intended. An absolute must have for any fan of Montgomery, and highly recommended to those new to her work.
Posted by Melwyk at 12/02/2009 10:38:00 am