Please welcome Cathy Marie Buchanan to the blog today! She is discussing some of the ways libraries and librarians helped her with the writing of her historical novel, as well as sharing some of the historical photos she located which are included in The Day the Falls Stood Still.

While researching The Day the Falls Stood Still, I reacquainted myself with the library of my youth, The Niagara Falls (Ontario) Public Library. Things had changed: Card catalogues were online. There were banks of computers. I didn’t think to ask, but I doubt the vinyl LP of Merchant of Venice that I had once borrowed to cram for high school English exam was still on the shelf. That isn’t what surprised me though. My astonishment was reserved for the richness of the local history collection housed between the walls.

I crossed the threshold of the library’s main branch, thinking I might find a useful history book or two. After all The Day the Falls Stood Still is set in Niagara Falls in 1915, and the male character central to the plot was inspired by William “Red” Hill, Niagara’s most famous riverman.

What I found beyond that threshold was a robust local history collection, an astonishingly good online image database, and a local history librarian eager to share her expertise. It was there that I found the text I turned to most often while researching The Day the Falls Stood Still, an anthology put together by the Niagara Falls Kiwanis Club in 1967. As one tiny example of the thousand ways that book helped me shape mine, consider that the name of every local boy who didn’t make it home from the Great War appears in that text, that a smattering of those names reappear in that same context in The Day the Falls Stood Still.

Still, history books were just the beginning. I was handed file upon file bursting with old newspaper and magazine articles, essays, pamphlets, and images all sorted according to topic, and I came upon gem after gem. Where else in the world would I have unearthed a pamphlet, self published by “Red” Hill to commemorate his heroics and sold to tourists for 50 cents? Where else would I have come across an essay detailing the history of Glenview, the mansion where the book’s heroine lived? There were collections of historical maps and travel books, too, many helping me get my head around Niagara Falls way back when.
I was directed to the library's online image database and was dumbfounded to find over 20,000 images there. The Day the Falls Stood Still is peppered with historical images, and even if finding the best pictures was often tedious, hitting upon a shot of William “Red” Hill or his famous scow rescue made the hours spent searching easily worthwhile. I scoured the online image databases of the Library of Congress, Library and Archives Canada, the Ontario Archives, the Toronto Archives, and, of course the Niagara Falls (Ontario) Public Library. I would not have predicted it, but when I tallied the images that made it into the book, the highest number came from the library’s database.

Local history librarian, Cathy Simpson, expertly culled files and books, according to my latest query. She knew to which of the local museums and historical societies to point me. And, in one of her many leaps beyond the call of duty, she tracked down the whereabouts of William “Red” Hill’s riverman kit of grappling hooks, ropes, and life saving equipment and sent me off to have a look.

The text on the cover of The Day the Falls Stood Still reads “Steeped in the intriguing history of Niagara Falls, this is an epic love story as rich, spellbinding and majestic as the falls themselves.” Any reader who finds the statement the tiniest bit true should know that without the Niagara Falls (Ontario) Public Library, The Day the Falls Stood Still would have been a lesser book. 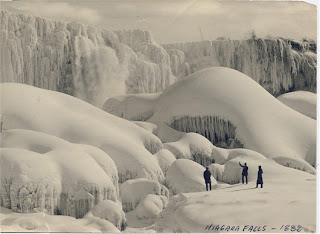