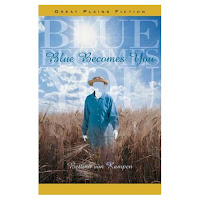 I picked this book up on a whim; it was in the library and is set in Manitoba, so I thought I'd give it a try as part of my Canadian Book Challenge reading. I'd never heard of it before, but it rewarded the chance I took on it! It was an enjoyable read -- with a few flaws, but overall giving us an interesting main character and some enjoyable musings on life, as well as drawing a clear picture of the Manitoba landscape.
Charlotte lives in Norman, Manitoba, and is retiring from her bakery job due to heart problems. She's been working in the bakery for over 40 years; and how this came to pass is at the crux of the novel. As a teenager, Charlotte loved jazz. She played in a jazz trio at the local bar and had big plans to leave Norman as soon as she finished school, to travel the world and become a jazz musician. However, she ends up missing that one chance to leave, deciding to stay home for a little while to care for her depressed father. Then it seems to her that she is just too old, too settled to change her routine. Her thoughts and her recollections of life and what events brought her to this moment were the best parts of the book for me. I really enjoyed Charlotte, and her no-nonsense attitude; she didn't waste time wallowing in regret or despair, rather taking things as they were and realizing there was no point in feeling sorry for herself. Still, the life she wound up with, that of a baker who wakes when everyone else is asleep, and is bound by a limited circumference, is not perhaps all there is to her. The last line of the novel is pure brilliance, casting the story in a different light and opening up all kinds of possibilities in the imagination. I'll include it here for anyone who can't find a copy to read; it's too good not to share. Highlight to read it -- don't want to give it away inadvertently to those of you who will pick this book up!
After tonight, nothing would ever be the same. Finally.
Surrounding Charlotte we have a varied cast of characters. Her sister June, who did leave town but had a rather disappointing time of it, has come home in her retirement, back to the family home which she now shares with Charlotte. She's a different person than Charlotte; on a regular daytime schedule she joins clubs and gets involved in all kinds of activities. Together with Charlotte's boss, June is planning a big retirement party which Charlotte is not too excited to have to attend. Alongside June there is also the staff at the bakery -- Wade, a closeted gay man; Doris, a young high-school dropout who aspires to become an actress; and Vi, her boss, a high achieving woman who, with the city council, wants to make Norman an up and coming place to be for business. There is also the neighbour over the back fence, long time resident and immigrant from India, Kuldip Channa. Charlotte begins to feel connected to all these people as she moves through the weeks prior to her retirement, musing about what life might become when she doesn't have to wake at 2:30 am every day, or about how long her weak heart will hold out.
While I enjoyed some of these side stories, I really was most interested in Charlotte, her family history and her experiences. It felt a little like Von Kampen was trying to stuff in all aspects of small town living vs. city life; ie: views of homosexuality (using Wade the baker) or of racism (as shown in Kuldip's life). I felt that some of those elements weren't entirely necessary to the story, and especially in regard to Kuldip, not fully convincing. It is an understandable impulse; small town life is not a singular as outsiders may think and Norman seems more complex for the hints at all these difficulties. But to me, the strength of this book was Charlotte, her music, and her perceptions. An example of this is at a moment when she realizes she's walked to the bakery so many times that she could tell where she was just by the elevation of the sidewalk. This reflects on more than just one's surroundings:

It went beyond familiar, like the way people could find their way through their homes in the pitch dark of night. The way they roamed through the patterns of their thoughts, laid down over the years in the mind, always finding the same thoughts next to each other.

I liked this story because it also had a sense of humour about itself, even with some of the awful things that happen. It didn't feel like 'prairie gothic', by not taking itself too seriously, but still provides a far-from-glib read. It muses on whether missed chances are ever truly final, whether going down one road at one point means you can never branch off it again. I enjoyed it especially for the character of Charlotte, and for the inclusion of baking, jazz and some lovely evocations of dawn breaking halfway through Charlotte's work day.
Posted by Melwyk at 8/28/2009 11:14:00 am