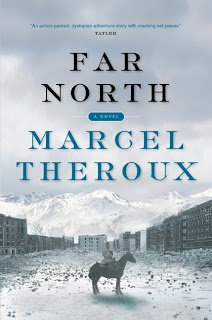 
From Saskatoon to Siberia... quite a way to go in both setting and theme! This post-apocalyptic survival novel by British author Theroux is a great read, similar to many other classics of this genre, but has a few differences which I really liked. First, this world seems to have been shaken more by climate change than a nuclear event (though it's unclear) but it is a reason that the main character can survive quite well in Siberia (it's warmer and has a growing season). Second, there is a flavour of the Western about it, what with lawless ragtag groups, hunters, and traders making their way through the largely uninhabited spaces. Our main character, Makepeace, is constable in the town of Evangeline, which now holds perhaps one or two other families tucked away somewhere out of sight. People keep their heads down, they struggle to put aside food and last as long as possible. Makepeace patrols the empty village, carefully watching the rare passersby on the great road which wends its way southward. When a Chinese woman appears out of the ruins of the town after one of these caravans passes, Makepeace is brought back into a world where human contact matters. Some time later the stunning sight of a small airplane flying overhead, and crashing, inspires a search into the possibility that life, technology, culture, has remained somewhere Out There.

This first third of the novel was the strongest part, for me. It described the everyday duties left to Makepeace, and what remained of the family home after parents and siblings had died: an untuned piano, some books, a garden plot. The minutiae of survival was fascinating, as was the routine that Makepeace kept to, patrolling the abandoned town just in case, rescuing books from where they had been used for fire starters, or were crumbling to mould. Once the narrative left the town, following Makepeace out into the world, into encounters with a mad religious enclave, then servitude to a corporate gulag, then an expedition to a ruined metropolis to scavenge what remained, it seemed more like set pieces. Time passes rapidly but the pace of the storytelling moves slowly. Eventually the hope of a civilized life remaining outside fades to disillusionment, ending up (after much struggle) back in the family home although not quite alone this time. While I found most of this interesting reading it didn't grab me in the same way as did the solitude and slow revealing of Makepeace's past in the first sections.

There were a few elements I found a bit jarring, one being the discovery of a mysterious glowing substance in the bowels of an abandoned city - it seemed rather science fiction-y and not quite necessary to the storyline, which began more like a Western survivalist tale. But that's just a quibble. One other, more important, difficulty I had was in the conclusion. Without giving too much away I can only say I found it odd that Makepeace suddenly became a sentimental, almost mawkish character in the final pages. I didn't really believe it and would have preferred a return to the crystalline solitude of the opening. The loss of hope of a better, outside world seems to have destroyed the self-sufficiency displayed throughout the book, and I suppose that does make perfect sense; if we have nothing to hope for is there really any incentive for survival?

Still, I really loved the reading experience -- I couldn't put it down and enjoyed the creative use of Siberia as a landscape, and the Russian elements, as well as the backstory which was doled out to us piece by piece. I liked the atmosphere of the book, the Siberian silence and the utopian dreams which led American pacifists to establish settlements in the great wasteland of Siberia in hopes of attaining a perfectly simple life. Of course, human nature does not allow perfection, and this book shows that both in big ways and in small, individual moments. This is a great read, especially if you are a fan of the many books featuring post-apocalyptic survival that seem to have sprouted up in the last few years. It has some original touches and a wholly surprising revelation early on which I loved. My take: slightly flawed but still well worth a read.

Read a bit of the opening

Luanne at A Bookworm's world loves it

Nicola at Back to Books considers it thoughtfully