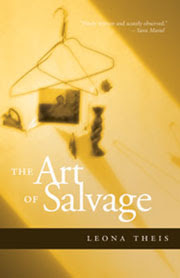 This is a novel about family, about mothers and daughters, and how we create our identity. Set in Saskatoon, it's my first choice for the 3rd Canadian Book Challenge. It appealed to me because of its setting as well as storyline; I grew up near Saskatoon so always like to see it represented in fiction. This turned out to be an absorbing read with two strong lead characters, Delorie and her daughter Amber.

Delores is 19, from a small town and a troubled family -- her father has a drinking problem. She moves to Saskatoon and starts up a new life, distancing herself from her family, getting a job at a bar and making new friends. She changes her name to Delorie. But all too soon, she has to depend on her mother again; she gets pregnant, and as per the usual advice in the 70's, it is suggested that she give the baby up for adoption. In preparation she lives in a home with other pregnant girls, where they are all warned against forming any emotional attachments to their babies. Most of them won't even see the baby before it is claimed by the adoptive family. Delorie fully intends to do this, but when she finally contacts her mother near the end of her term, her mother convinces Delorie to give the baby to her own family to raise. The only part of the equation that seems to stick with Delorie is the advice to remain emotionally distant, which she does; baby Amber doesn't even discover that Delorie is in fact her mother, not her older sister, until she is 8.

And then there's Amber's story. When we meet her we discover that at 25, Amber is adrift, not sure quite what to make of herself. She is now living in Saskatoon, single again, and working at a cafe. She is affected by mood swings, resembling bipolar disorder. With extraordinary energy she runs through Saskatoon on her accustomed routes, seeing the beauty of landscape and people. When down, she curls up in her apartment unable to function or believe in any goodness in herself or the world. She also collects odds and ends of things, salvaging parts of her past to try to create some understanding of both past and future. Out of some of these odds and ends, in a wonderful scene, she creates a mobile utilizing a symbolic totem for each family member she wants to represent. She uses a piece of a broken teacup for her mother, a badge for her father, photo for her brother, a piece of her own hair for herself, but is stumped when it comes to Delorie, and especially when she tries to encapsulate her birth father who she knows very little about. She is trying hard to salvage a relationship with Delorie, whom she has never understood nor been cherished by.

The novel is divided into four parts; in the first we see Amber and Del together by chance, watching the demolition of a house they had both lived in as young women new to Saskatoon. Amber only finds out at that moment that Delorie had lived in the same building years before. She salvages a doorbell plate as a memorial, leading us to discover her habit of scavenging physical items from the world around her. The second section takes us back to Delorie's life, explaining and grounding her character as someone defined by one major derailment in her youth. In the third, Amber gets her space to explain how this has all affected her; with the people she knew as her parents, not grandparents, now deceased she is reaching out to sister/mother Delorie. By the fourth section of the book, Amber and Delorie have indeed salvaged some connection between them, as precariously balanced as the mobile Amber creates.

The cover of this novel is extraordinarily fitting; it is obvious that the designer read the book. The colour (amber) and the mobile come straight out of Amber's storyline. The description of the mobile matches the image on the cover -- I flipped back and forth to examine it once I reached that part of the book. Excellent book design which I really appreciated!

I think this would be an excellent choice for book clubs; there is much to discuss in this book -- teenage pregnancy and how it was and is dealt with; the emotional scars of family secrecy and addictions; family relationships and identity; how a person develops a sense of self; and many other tangential topics. While I didn't find it perfect -- it was hard to see how Delorie had become the person she was as an adult, for example -- and the pace of the story didn't always work for me, it was so intriguing I had to keep reading. Amber, especially, was a wonderfully complex character.

Also reviewed at The Literary Word