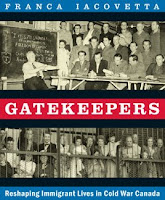 This fascinating history, winner of the Canadian Historical Association's 2007 Sir John A. Macdonald Prize, was a great read. I am particularly interested in this topic; my BA was in North American History and Literature, and I've kept reading history since, though with not quite as much regularity as I've kept reading literature! Still, I have a fondness for Canadian history, and this book, exploring the role that immigrants played during the Cold War, was a complex and thorough reading experience. The focus is primarily on European immigrants, including Ukrainian & Soviet immigrants, which, if you've been reading this blog for any length of time you will know is personally of interest to me. So for all of those reasons, I found this book both illuminating and surprisingly entertaining.

Iacovetta is a feminist, labour, gender, and migration historian -- and all of these topics are rolled into this narrative. The book looks at those whom she calls "gatekeepers": middle-class institutions (like the Red Cross, the IODE, church and ethnic organizations, even the NFB) and middle-class individuals (journalists, social workers, hundreds of volunteers) and their role in 'Canadianizing' newcomers. But it also looks at the experience of immigration from the newcomers' point of view, and how they in turn influenced the gatekeepers. Each chapter takes one aspect of immigration and discusses it from a variety of angles; for example, the first chapter looks at how the press presented both political and human interest stories. In further chapters, she then examines governmental and institutional attitudes towards socializing all these new immigrants, as well as pointing out the place of Canadian but ethnically based groups, such as the Ukrainian Canadian Committee, in shaping views of how one should remain ethnic while becoming Canadian. The views of such support groups were prescriptive, most of them being strongly and vocally anti-leftist and anti-Communist. (This was the Cold War, recall).

An element I was drawn in by was the focus on women's experiences; many of them were joining husbands or families that had come ahead, while others were single refugees without a family structure to protect them. Iacovetta draws on magazine and newspaper reports - from such mainstream publications as Macleans and Chatelaine - to reveal a fear of female sexuality which informed the treatment of immigrant women. If they followed the strictures laid out for them, learning how to become good housewives and raise morally upright Canadian children, all was well. When things went awry, and domestic violence or more forthright feminine behaviour was revealed, the women were punished by being blamed for any problems which arose. This included having their characters maligned even when they were the victims of violent crime. She discusses a number of criminal investigations among immigrant populations in which women were murdered, and how the focus of coverage was on explaining why these women brought this violence upon themselves (variations on the old and tired 'well look what she was wearing' accusations in cases of rape). In fact, there were numerous social and economic reasons behind these happenings, which Iacovetta delineates and explores further.

Chapter Six, entitled "Culinary Containment?", provided an entertaining look at how 'postwar food and nutritional gatekeepers', such as dieticians, public health nurses, social workers, food writers and so on, influenced middle-class aspirations among newcomers. While many of the women entering Canada at this time had previously worked or been alienated from a home for many of the war years, the Canadian ideal was still the 'domestic containment' of women as homemakers. Women's magazines and television, including NFB films, strongly pushed for the retention of ethnic foodways as a way of making immigrants feel connected to their roots while minimizing subversive political activities. This multi-cultural view held that culinary pluralism was a method of making incoming cultures part of the greater Canadian whole. Still, much emphasis was placed on the consumer desires for new and shiny kitchens full of large North American appliances, and reliance on flashy supermarkets. Furthermore, the well off and comfortably housed nuclear family stood for democracy, as opposed to the Soviet family where the mother had to work outside the home and struggle for enough food to get by. Iacovetta talks about various NFB films made for educational purposes, to inform the gatekeepers and encourage the 'correct' aspirations in immigrants. One such example is Arrival, made in 1957, showing how an Italian woman becomes accustomed to her new life partly through the comfort of appliances and abundant food.

This is quite a complete history on this subject, full of great archival photos, a tempting bibliography and useful index. It reminded me of why I loved my history degree so much in the first place, and I would definitely recommend it to anyone interested in either women's history, the stories of immigration to North America, conditions of the Cold War years, or simply well written social history with tons of fascinating tidbits. I always know I have really enjoyed a book when I can pick out bits to use as witty dinner party reparteé ;) But seriously, if you enjoy reading nonfiction and like women's history, this one is a great find.

Check out Between the Lines' website; they publish some fabulous history and socially relevant nonfiction -- their backlist as well as forthcoming publication list is quite tempting!
Posted by Melwyk at 7/02/2009 08:36:00 am