A Force of Nature 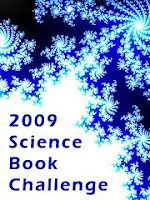 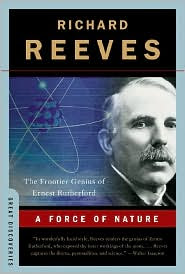 Another choice inspired by the Science Book Challenge, this book is part of a series called "Great Discoveries". I read another in this series last year, Miss Leavitt's Stars, and really enjoyed it. So I thought I'd read this one as well; it's written by a biographer and political correspondent, not a science writer, and is a tiny bio at 207 small pages -- how do you compress a life like Rutherford's into just so much space? Well, Reeves has succeeded admirably.

I picked this up for many reasons: I like reading about physicists at that time period, and I was interested in Rutherford because he spent a few years teaching at McGill University, my alma mater. (In fact the physics building was named after him, and you can now take a virtual tour of the Rutherford Museum - a room full of his old equipment and apparatus).
It tells us the story of a man who was described by a colleague as "a force of nature". He was an exceptionally bright New Zealand farm boy, and his career began in the 1890s, when he won a scholarship to Cavendish Laboratory at Cambridge University, then the premier centre for physics studies. He was always very confident and self-assured, not fitting into the genteel English gentleman scientist mould very well; he was once described as looking like an Australian shop-keeper, and when he gave radio addresses it was joked that he didn't need radio to reach the colonies (his voice was notoriously loud, so much so that in later years researchers put signs up in the labs Rutherford supervised reminding "people" to lower their voices so as not to disturb the various delicate measurements going on). But nobody ever denied his brilliance.

He was recognized as a great experimental physicist and a mentor, involved in hundreds of atomic discoveries (like the orbital structure of atoms, the concept of the half-life of radioactive materials, and the achievement of Cavendish Lab being the first to split the atom). His own work as well as his particular genius at mentoring other young men make his place in physics a vital one. However, he championed not only other men: in 1920, Cambridge University was experiencing a post-war boom, and to reduce the number of students it was suggested that women be refused admission. Rutherford, along with chemistry professor William Pope cowrote a letter to the London Times, stating:

For our part, we welcome the presence of women in our laboratories on the ground that residence in this University is intended to fit the rising generation to take its proper place in the outside world, where, to an ever increasing extent, men and women are being called upon to work harmoniously side by side in every department of human affairs.... at the present stage in the world's affairs we can afford less than ever before to neglect the training and cultivation of all the young intelligence available. For this reason, no less than for those of elementary justice and of expediency, we consider that women should be admitted to degrees and to representation in our University.

I enjoyed this short history of Rutherford's life, even though I know there is much more about him to learn. That's what the bibliography is for, I suppose: now I will have to look up a longer biography and read it too. This was well written, and talked about a scientific life in the way that I enjoy, full of gossip and personal tidbits which make the person real to me. (His wife telling him at dinner, in front of important guests, "Ern, you're dribbling again" just made me laugh). The science is very clear, both the explanation of various experiments and of their significance -- plus there are some great photos of the labs and the scientists involved. Entertaining to see the relatively unsophisticated equipment they used to make these extraordinary discoveries! I like this series for its engaging approach to scientific lives, and recommend them to anyone looking for a brief but fascinating introduction to various characters such as Rutherford. I think they might be particularly appealing for science minded high school students, but as someone far away from the teenage years I can state that I found this thoughtfully written and a satisfying read.
Posted by Melwyk at 7/07/2009 10:00:00 pm