Sheepishly admitting I love it! 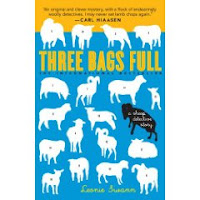 Three Bags Full / Léonie Swann; translated from the German by Anthea Bell.
Toronto : Anchor, c2008.
This is a short, delightful mystery featuring a flock of 19 sheep living in Glenkill, Ireland. The sheep discover their beloved shepherd George dead one morning, and decide that it is up to them to find the truth behind his murder.

The setting is thoroughly believable; small town Ireland but more specifically one meadow outside of town is described from a sheep's-eye view, so that we know exactly which plants grow where, and what the barn looks, smells and sounds like. All the townspeople are identified by how they appear to the sheep, so that things can get muddled; for example, they call the minister by the name of "God". The charm of the story is primarily due to the individuality of the sheep and their resultant contributions to the detecting and the various meandering conversations. Othello the black sheep, Melmoth who wanders away from the flock, Mopple the Whale who eats continuously and is the 'memory sheep', remembering all for the flock, Zora who dreams of becoming one of the cloud sheep in the sky, or Miss Maple the smartest sheep in Glenkill; all of these and the many others entertain and amuse while spinning out a delightful story.

While the story is light and charming, there are also more serious elements here. Questions of individuality, of conformity and the herd mentality, of loneliness and love abound. Head ram Sir Ritchfield often bleats out "No sheep may leave the flock!", and this has more relevance to the mystery than we first know. It makes sense that the author has degrees in philosophy and psychology; they both help with the story in my opinion.

There are also very funny scenes, as when Ham (the butcher) and God (the minister) are convinced they are being threatened by the Devil for their sins, because they have both been seeing the head of a horned ram appearing to them in windows and out of the fog. Of course, that horned ram is simply one of the flock investigating the goings on. I really enjoyed reading this and would recommend it to fans of Agatha Christie or cozy mysteries. It is a lovely read.

(inspiration to read came from reviews I found by Heather at The Library Ladder and by Duck Thief at Great White North )
Posted by Melwyk at 9/07/2008 06:14:00 pm