Upon rereading Anne of Green Gables this summer I've noticed more than previously the book's actual construction. I've read it numerous times since I was about twelve, but looking at how LMM structured it to work most effectively has been intriguing. She uses things like repetition and parallel constructions to build the story, leading us through Anne's adventures until we reach the final emotional climax and Anne's decision to stay in Avonlea with Marilla. Just look at the titles of the first three chapters: "Mrs. Rachel Lynde is Surprised", "Matthew is Surprised", "Marilla is Surprised". Each chapter takes the same subject, Anne's imminent arrival, and further embroiders it and draws us in to feel the tension of wondering whether Anne will indeed make a home at Green Gables or be sent back to the orphanage. (at least the first time we read it). 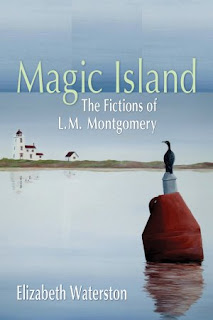 I was actually surprised at how much I kept noticing the writerly aspects of Anne this time around. I guess it is good timing that just as I become interested in this, a new book has been published by Oxford University Press called Magic Island : the fictions of L.M. Montgomery, by Elizabeth Waterston (one of the acknowledged experts on LMM, co-editor of her journals, the other being Mary Rubio, whose full biography A Gift of Wings is to be released by Random House next month). It's a full look at all of LMM's novels, in chronological order, interpreting them in light of her life experiences and new facts about her writing career. It begins, of course, with her first book, Anne of Green Gables. Due to the scope of the book, the essays are brief, Anne's being only 10 pages. Still, for any Anne fan, it is a fascinating look at things you may not have known lurked in the background of any particular book; inspirations, dreams, problems being worked out, and so forth.

My only complaint is that there is a fair bit of speculation involved in many of the essays, ie: there may have been some repressed emotion showing up here, this character may have been influenced by the memory of her childhood friends, etc. Considering how brief the essays are, necessarily, I would have liked more reliance on direct correlations between her life and her fiction. Nevertheless, that is a minor complaint about a wonderfully entertaining, endlessly fascinating book tackling something which has been overlooked until now. It has also made me think what a wonderful reading project it would be to read each essay alongside the book it discusses. I skipped around in the book reading about my favourite novels first, but even those for novels I haven't reread in years have reignited my interest in all things LMM.