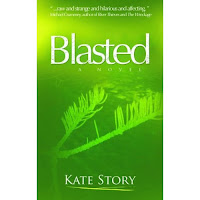 Blasted / Kate Story
St. John's, NFLD: Killick Press, c2008.
Remember how I went to Book Expo this year and saw Paul Gross? Well, when I was in the long, long lineup to see him, the book gods smiled upon me. I was standing right in front of a small publisher's booth, one I hadn't scheduled in. At that very moment, there was a first time author giving away copies of her novel, Blasted. As it was a Newfoundland based book I thought instantly of the Canadian Book Challenge and accepted a copy after a nice chat with said author. I am so grateful I did, as I've just finished Kate Story's novel and is it a delight!
The voice is fresh and the story unexpected; the blurb does not fully prepare you for what the story holds within. Here's the blurb:
Blasted is a story of Ruby Jones, an irreverent, exuberant, and troubled woman who lurches between love affairs and cities. The narrative shifts between generations and geographies, between contemporary life and stories as old as the hill that looms over Ruby’s birthplace. All the while, she is haunted by mysteries that surround her father and the generations before him. When Ruby unravels at last, she must face the demons that pursue her. Steeped in Newfoundland folklore, Blasted mines a rich vein of experience, layering the mundane and the magical, and evoking the forces that inhabit the land.

Well, okay, on second thought that does pretty much cover it! But it doesn't truly hint at the originality and lively action of this tale. The character of Ruby drives the book; she's a fantastic creation, realistic and yet a force of nature. She's hard-living, yet vulnerable, foul-mouthed yet charming, and full of other contradictions as well. She loves her grandparents back in Newfoundland, yet she lives in Toronto, and has surrounded herself with a family of fellow artistic originals there. Balancing Ruby's messed-up life with her family history and her connection to the folklore of fairies and the little people in Newfoundland, Story creates an astonishingly fresh and fascinating read. If you enjoy a story with shades of urban fantasy, strong characters and wonderfully three dimensional settings (Toronto and Newfoundland both) -- and don't mind some really powerful cussing -- try Blasted. It is a Canadian novel which breaks the mould. (I'd say it doesn't meet the guidelines as laid out by Ian and Will Ferguson...)

What a surprise this was! It's a great book that, after the trepidation I felt through the first chapter, totally sucked me in and kept me reading eagerly. Even though it was too late and I should have been sleeping and reading it just before bed while half asleep gave me really weird dreams... nevertheless! Read it. It's something new, and definitely worth it.