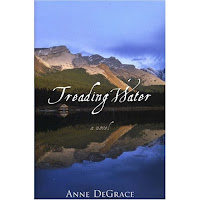 Treading Water / Anne DeGrace
Toronto : McArthur & Co., c2005.
This is my choice for British Columbia, for the Canadian Book Challenge -- which, I might say has been a challenge far more interesting and indepth than the insipid Canada Reads debates this week. But, to get back to the point; Anne DeGrace has here written a novel in short stories, with a few of the chapters being published separately before the novel. The story deals with the fictional town of Bear Creek, which was founded in 1904 and then flooded out of existence with the construction of a dam in 1967. (it is inspired by the story of the BC community of Renata).
The book begins with the first settlers in Bear Creek, and each section, headed by a date, follows the community from various people's perspectives. The community grows and families become more and more entwined, which you see from all angles. I appreciated the first half of the book most; the writing style suited the doomed existence of this town, and drew me in with intriguing characters. Suddenly, however, in '1932', the story shifts to first person, a story told by a young boy. I found the tone and the point of view jarring, and never really recovered the enchantment of the earlier chapters. This is also the first piece of the book which had been published earlier as a short story, and while it certainly works as a short story, I felt it didn't quite fit in with the rest of this novel somehow. The characters involved reappear in the later chapters, in different configurations once they are older, but the book began so strongly focused on the family of the first child born in Bear Creek, Ursula Hartmann, that I was really most interested in her. She does play a big role in most of the chapters and it was those not featuring her which felt a bit out of place.
Still, this book gives a panoramic view of a century in one town (the final section is '2005', in which Ursula's granddaughter returns to the original site of the town at low water). It draws portraits of settlers driven by religious or family feeling to set up a remote community, based mainly on farming. As it is BC, most of the families have orchards, and the town is known for its cherries. The story traces the decline of the town to a point in the 60's when fruit is no longer profitable, and orcharding has been given up by most residents. They work outside of Bear Creek, and children go to school in a distant town, with a lengthy commute across the river and down the highway. It is at this point that BC Hydro wishes to buy out everyone in the town and flood it. Most people settle, but the holdouts (including Ursula and her husband Ed) do so through their sentimental attachment to Bear Creek. It causes all kinds of bad feeling among these people who have known each other all their lives, and when Ursula finally settles it is because she knows it is impossible to resist any longer. Hers is the last family to leave, save the ferry operator, who must take Hydro's work crews across the river where they are burning down all the houses.
The book is an elegy, but the writing only matches that sensibility in the first half and in parts of the second half. I felt that the second half read more like discrete stories than a novel. Despite this flaw, I enjoyed the story and the characters, some of whom were brilliantly conceived. It does provide a view of BC as the final frontier for the restless. I also appreciated the intriguing idea of telling the story of a town from creation to destruction. I'd rate it as recommended with a few reservations.
Posted by Melwyk at 3/01/2008 12:25:00 pm