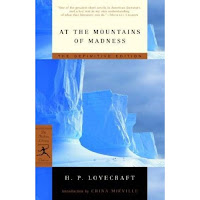 After much beginning and re-beginning, after putting this book on a couple of Challenge lists(Carl's RIP II, my personal Polar Reading list), I have FINALLY finished reading this 102 page novella.
I'm not sure why it took me so long to read the whole thing. Perhaps it was the hundred other books distracting me, or perhaps it was the prose itself; the story is presented in the form of a scientific report, so begins intentionally dry and verbose, contrasting with the increasingly sensational content. The story goes as follows: a scientific research team from Miskatonic University heads to Antarctica in 1931. They are there to do geological research, but in the course of their drilling a smaller expeditionary group comes across a subterraean chamber in which lie the bodies of 8 very strange, winged beings. Being scientists they are very excited and proceed to perform an autopsy on one creature. When the narrator and his team make it to the camp, it is to find a disastrous situation; their colleagues and all their sled dogs have been slaughtered, and the alien bodies are gone. The narrator and another colleague, Danforth, set out to follow the signs indicating where the bodies may have disappeared to. They take their plane toward the mountains on the horizon, the eponymous Mountains of Madness. There they discover strange formations which are a bit unsettling, and when they cross the mountains they discover an ancient stone city which stretches for miles. The isolated, utterly alien city on this Antarctic plateau must be explored, they are scientists, after all. So they land and begin exploring, going further and further into the city. They go down through the remaining structures until they are entering an underground tunnel; at this point they discover the missing corpses of one of the scientists from the camp and one of their dogs, bound to a sled like specimens. As they enter the caverns, they come to realize they just might not be alone after all. The horror is such that as they are racing back toward the surface and their plane, Danforth starts gibbering out the names of the subway stations of the Boston-Cambridge line. I found that moment very chilling indeed, and Danforth is never quite right after that.
It's a fascinating book, and the edition I read includes a lengthy essay, Lovecraft's "Supernatural Horror in Literature". After this eerie tale of supernatural horror in Antarctica, I feel I should read Dan Simmons' Arctic story, "The Terror". I am glad I've finally finished this classic by Lovecraft. There are still many Polar themed books ahead for the last month of this first International Polar Year, but I'm relieved that IPY really runs for 2 years, until March 2009; I'll need that long to catch up to my growing Polar TBR list.
Posted by Melwyk at 12/01/2007 07:49:00 pm