A Promise of Hope 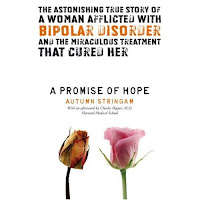 A Promise of Hope / Autumn Stringam
Toronto : HarperCollins Canada, 2007.
I've just finished the ARC of this book, and it is a fantastic, heart-wrenching read. It is the story of a Canadian woman who suffered from a serious form of bipolar disorder; her mother also suffered and ended up committing suicide. Autumn's life story is mesmerizing to read. Her childhood relationship with both her mother and father, her mother's suicide, and her own descent into fullblown bipolar are all harrowingly told. She doesn't spare herself or her family in delineating the agonizing effects of this disease on those around a bipolar sufferer. The first half of the book is all about her life with her family, up until she is married and has a son of her own, then shows the same intense symptoms that her mother had. The paranoia, the manic buying sprees, the violence and hallucinations and memory gaps, all added up to a story I could not stop reading, afraid to find out what resulted. The only thing I wanted more of was knowing how this had affected her other eight siblings.
The later part of the book details Autumn's father's search for a cure; after losing his beloved wife to suicide, and seeing two of his children displaying the same symptoms, in his desperation he mentions his son's behaviour to an acquaintance at church. This man, a pig-feed salesman,
replies, "That boy sounds like a pig with ear-and-tail-biting syndrome." That was all it took for the two men to start trying to develop a nutritional supplement based on pig feed formulations which would remove the symptoms Autumn and her brother displayed. Astonishingly, after much tweaking and experimenting, they find a supplement that works for Autumn. Much of the book after this talks about her father's struggles with Health Canada, who does not want to let this supplement be distributed as a health aid. (They were vindicated and now run their company out of Alberta) This part of the book, though very important and fully as frustratingly bureaucratic as you might expect, is not as compelling as the personal story Autumn had been telling up to this point.
Her story is moving and provides "a promise of hope" as the title says, to those who think that there is no way out of the horrors of a bipolar diagnosis. Although Autumn is clearly a believer, she is also evenhanded and does point out that there needs to be clinical studies of this product, and that one treatment does not work for everyone. There is also an afterword by Dr. Charles Popper, a Harvard physician and expert in this field, stating the clear medical needs for studies and further research, but he also supports the Stringams in their discoveries. All in all, if you are the least bit interested in mental illness and its effects on families, or the treatments provided for such, or have had bipolar touch your life in any way, you will find this book compelling. Not only is the story riveting, but Autumn Stringam is a talented writer as well. The narrative flows, carrying you along, without becoming maudlin or sentimental. It is a book which raises many questions about family dynamics, about mental health and assumptions made about illnesses, about established treatments and possibilities for those diagnosed. I found reading about it from a Canadian viewpoint startling at times; I am so unused to hearing of big, important events unfolding in small town Alberta. I can't say I 'enjoyed' this read, rather I'd say I was inspired by it and think it is a vital read for anybody interested in this subject matter.
Posted by Melwyk at 10/10/2007 06:38:00 pm