This was a very enjoyable novel, set on the home front in England, mid-WWII. It follows the fortunes of three women as they adjust to the new patterns of life in their small village.

Grace Carlisle is the vicar's daughter, and she's trying to fix her deceased mother's wedding dress for her upcoming nuptials. But she's as uncertain about the wedding as she is about the repairs, especially after she runs into Hugh Westcott, a childhood friend and member of the local aristocracy who she hasn't seen in years.

Cressida Westcott is a successful, London based fashion designer who left the village when she was young and had no intentions ever to return. But her fashion house and her home have both just been destroyed in the Blitz -- she had a narrow escape. She has nowhere left to turn other than her old home. Her nephew Hugh is now in charge, and she can only hope that both Hugh and her niece Violet are more welcoming than her late brother was.

Meanwhile, Violet is excited by the idea of her famous aunt coming to live with them -- but shortly after Cressida arrives, spoiled Violet receives a conscription letter. She's off to train for a position in the women's corps, but doesn't know what she will end up doing.

The three women learn to be more empathetic, build their relationships, create meaningful activity that draws the women of the village together, and of course, find true love.

It was a straightforward story with not too many surprises. It was pretty easy to see the direction that the story was taking as it went along, but it was an enjoyable read with interesting characters. When they start the Wedding Dress Sewing Circle, spurred on by Cressida's arrival and Grace's need for help from the ladies of the already existing sewing group, it livens up the village and allows for some great sewing talk. As mentioned in the notes to this book, and in the last book I read, Fashion on the Ration,  a Wedding Dress lending circle was actually a real thing in the war, started by Barbara Cartland (yes, the romance novelist) who was upset to think that women in the services would have to marry in their ugly uniforms. There is a lot of fascinating historical content in this book, which was so intriguing.

The parts I was most drawn to were the fashion bits; I thought they were the most unique parts of the story, and of course the whole idea of clothing availability and design in wartime is of interest to me -- I just read a whole book about it! There is info about the clothes rationing schemes rolled into the story quite naturally, and Cressida, as a designer, is asked to participate in the (real life) design challenge given to a handful of fashion designers by the British government when they were trying to figure out how to make Utility clothing more appealing. The scenes at the challenge event were fun to read, especially since Grace was one of Cressida's models -- it was entertaining to see our characters inserted into an historical moment.

And there was also a bit of historical detail shared at the top of each chapter; the explanation of the design requirements for a piece of Utility clothing was my favourite bit. 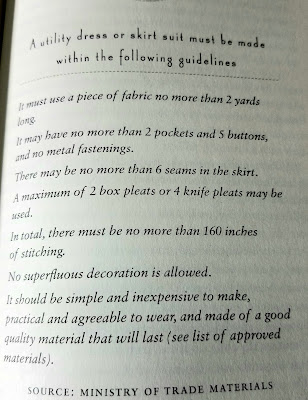 If you enjoy a sweet historical romance with a Happy Ever After and lots of period colour, as well as a lot of fascinating fashion tidbits, I'd recommend this read.