The House Without the Door


This little find was unexpected and irresistible when I saw it in a used book store. The fact that I was on a classic mystery reading streak was one part of it, but the actual physical book itself was another temptation in this case. 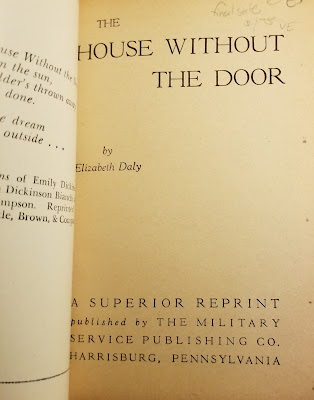 Look at it! It's so intriguing. Published by a wartime reprint house, it's small enough to tuck into a pocket, and warns that titles in this series may soon be out of print due to paper shortages - talk about stimulating demand. 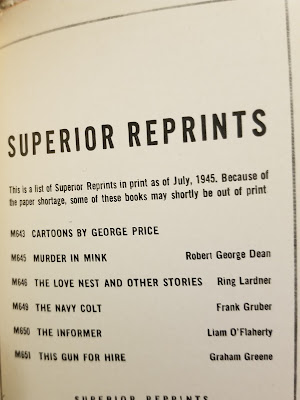 As to the story, I found it a middling read. It's a part of a series featuring Henry Gamadge, a documents specialist. His occupation is unusual enough to appeal, and in this book he's newly married, with his wife Clara playing a role in the research for the case. He's in the tradition of gentleman sleuth, and is prized for his discretion and detecting skill.

As this story begins, we meet Mrs. Vina Gregson, a widow who was acquitted by the courts of her husband's murder, but the court of public opinion hasn't been so kind. She now has lots of money with which to dress nicely and live well, but she's basically in seclusion, afraid to go out in public. And she's just started receiving threatening letters, she assumes from the person who really killed her husband. So she calls in Gamadge.

Now to me this is the Poirot Conundrum -- why are detectives always called in to cases where their findings are not really going to be complimentary to the client? I'm not sure why this happens so often in mysteries, but here we are again. Gamadge starts to investigate Mrs. Gregson's stepchildren, relations and even her house staff, and abruptly orders her to decamp to a country rest home he knows of, where she'll be safe and isolated.

This country residence is quite intriguing, being run by two women who seem to be a couple. I'd have liked to read more about them! They aren't thrilled with his sending a notorious murder suspect to them but they do owe him a favour, so they take her in. But is she really safe there? Time will tell.

There's quite a bit of thrilling intrigue here, with poisons and pistols, rich people's dinner parties, dead bodies and more. But it's a bit opaque and complicated, sometimes illogically so. There are a lot of characters, and since I had never heard of this series or read any of the earlier books, I felt that I was missing enough of the character backstory that it made Gamadge harder to warm to.

I can't say I enjoyed the story enough to seek out more of this series, but it was okay, and had some compelling bits that made it worth reading. I did enjoy the physical book a lot - it's in fabulous shape for a book published on wartime paper in 1945. And that just added to the reading experience.