This one was the perfect read for me. I found it accidentally, having somehow missed that Thomas King had a new book after Indians on Vacation -- which I'd heard about endlessly, and has even won the Leacock Award recently.
Well, Sufferance is a different kind of book. It is a strange mix of corporate thriller, small town politics, Indigenous history, and a hit of the Dead Dog Café. But it works.
Jeremiah Camp is a Forecaster, a person with the ability to see patterns and predict how they will play out in the future. He was much in demand by a billionaire corporation, but something went bad and now he lives alone in an old Residential school adjacent to the reserve his mother was from, hiding out from the world and trying to restore the gravestones of the children buried at the school as a memorial.
Along with living alone, he hasn't spoken aloud in years. But he does have a bit of companionship - a nameless cat, a handful of crows, and a daily trip into town to buy a brownie from the French Canadian baker and share it with a friend who owns what used to be a café. There are a few other locals that he interacts with at the sort-of café, including relatives who still live in government issue, crappy, molding trailers on the reserve.
But nobody can stay solitary, even if they want to. Jeremiah's past returns -- his former boss has died but his daughter has taken over the company and is just as ruthless. She wants a forecast, and she won't take no for an answer. Quite literally.
As we learn more about Jeremiah's past and why he left his job, and why he isn't very interested in going back, we also delve into questions of extreme wealth and the inequities between Jeremiah's boss' world and that of the reserve. What is the moral cost of hoarding wealth as these billionaires do? And what can people actually do about it? The answer here, as always with Thomas King, is dark and cynical, though laced with his usual humour (jokes about certain CBC radio shows appear, for example). His character is basically in existential crisis, and while there isn't a neat and tidy ending, community seems to be both his bane and his potential salvation.
This one moved quickly, it kept me flipping the pages, and it had some thoughtful themes to chew on. Add in some laughs and a bit of a mystery, and this was a winner in my view.
The only flaw is the cover. This has to have the worst cover I have ever seen. Black type on a dark red background, and red type on black for the flaps = completely unreadable. From a distance you can hardly tell that there is an author name or title even on the cover, and forget about accessibility in reading the flaps - I could hardly read them without angling the book for some light to throw the text into relief. My husband suggests they were going for a "oh, is this a Stephen King book?" vibe, but I don't think Thomas King needs the help. The digital image above has had a lot of colour correction to make it clear. Please disregard the cover design, which does this great book no favours. I look forward to the release of a softcover edition with a readable and appealing cover! 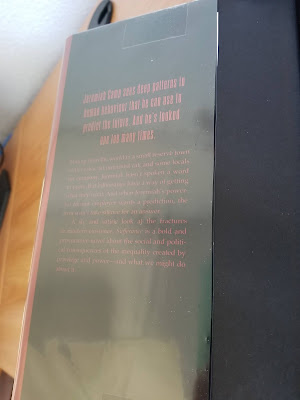