Another Quebec set novel, and this one is a doozy! I picked it up at a local thrift store quite a while ago now, and good thing it was at a thrift store price!

Catherine Ellis, a young woman from Western Canada, is left an old house in Montreal by her eccentric uncle. She arrives at 63 Markham Avenue to find the housekeeper and her daughter, the daughter's creepy hipster boyfriend, and an attic renter all installed.

Does she call her lawyer and evict them all? No, of course not. She lets herself be cowed by them into doing what they want. The boyfriend Eddie comes and goes, and is clearly a gangster type. You can tell that by his ominous behaviour that no-one seems to notice much (except for Catherine) and by his hilariously hep-cat speech patterns.

"You don't know what you're talking about, baby," Eddie said softly. His hand closed lightly over Moira's. "Play it cool, will you?"

Meanwhile, the attic tenant, Luke Dowling has come to her rescue a number of times already. But he also holds strange parties for his beatnik friends and seems to forget that he lives in her house and that there is anything at all odd happening. The plot is all over the place and Luke goes from neutral to sympathetic to coldly imperious and back again; it's like Fry can't decide if he should be Heathcliff, Rochester, or Henry Tilney. And the set pieces like Luke's party are so, so period. Poor Catherine, a nice young girl from a small town, shows up at this hip party in a homemade green silk taffeta gown like a proper young lady. I have to say that this discussion of the clothing choices for the party was the most interesting part of the book for me!

The mystery itself makes no sense at all, and the final reveal of the fortune that Catherine's uncle has hidden away for her, and where, is so silly, and really not much of a fortune at all. Certainly not worth all the build up.

Catherine stays holed up in the house for most of the story, even though she has been so looking forward to leaving tiny Logan Falls and moving to Montreal. She barely even takes a walk! When she does walk down to the lawyer's office, though, I could pretty much trace her steps and guess where Fry has located this house of hers. The Montreal setting, despite how little we see of it, is the best part of the book.

Pamela Fry was born in England but moved to Canada at age 11 and spent much of her time in Montreal. At the time she wrote this book she was living in England again. This was the only edition of this dreadfully confused book -- one that doesn't know if it is a modern gothic, or a psychological drama. She did write one other mystery that used Montreal as a setting; you can find out more about her and her books over at The Dusty Bookcase if you are interested. 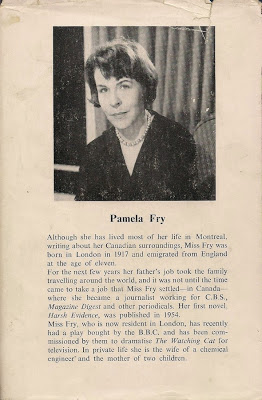