The Women in Black 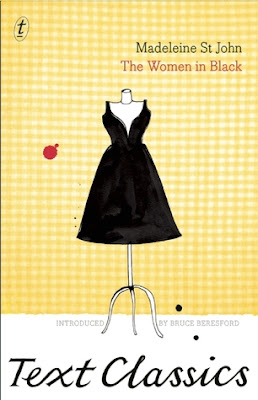 Finally, a new discovery that was a true gem: romantic, comic, clever, and a keeper! This book was recommended to me by Nancy Pearl back at the end of the summer, but only now have I found a copy via the magic of interlibrary loan. However, after quickly finishing it, I'll be searching for my own copy, since this is a book I know I'll be rereading often.

It's set in Sydney, Australia in the summer of 1959; young Lesley (who changes her name to Lisa) gets a temporary job helping out at Goode's Department store in the weeks before Christmas, while waiting for her test results to see if she'll be able to go to university. She ends up in Ladies' Cocktail Frocks, mainly, with Mrs. Patty Williams and Miss Fay Baines as her fellow saleswomen; Miss Jones is their alterationist; and Magda is the glamorous Continental refugee who runs the inner sanctum, Model Gowns. But they all wear a uniform: black dresses.

All these women (well, except perhaps Miss Jones) have their own lives that are slowly expanded upon in the short chapters that follow. And they begin to cross over into one another's lives, too, once Magda takes an interest in Lisa. Most of the story revolves around romance in one way or another, but it's utterly charming -- full of female relationships, and of course frocks. Oh, those dresses!

The writing is exquisite: it's clever and quick, with wonderful characterizations and settings. Goode's Department Store is a great canvas for this story. And it's quite seasonal: it opens 6 weeks before Christmas, and the retail setting and the chaos of big sales reminded me of the opening of a recent read, House of Windows (1912) in the depiction of a group of salesgirls cleaning up after an annual sale. I do love store novels!

I hadn't known what this book was about before picking it up, but when I get a recommendation from someone who knows my reading tastes, I try to follow it. I loved this book. It's a fairy tale in which all goes well and everyone ends up happy, but it isn't saccharine. There are jabs, there are clear-eyed observations of the characters, and there is a lot of witty humour. And there are really some lovely bits. One of the highlights for me was when the mysterious Miss Jones speaks to Lisa near the end, after everyone has heard that she has aced her leaving exams and will be heading to university. She says:


"Well, it's no surprise to me at all. I don't expect it's a surprise to you either. You're a clever girl, I could see that... A clever girl is the most wonderful thing in all Creation you know; you must never forget that. People expect men to be clever. They expect girls to be stupid or at least silly, which very few girls really are, but most girls oblige them by acting like it. So you just go away and be as clever as ever you can; put their noses out of joint for them. It's the best thing you could possibly do, you and all the clever girls in this city and the world."

If you love clever stories about clever girls, and beautiful dresses, and women and men together, pick this one up as soon as you can. What a delight.


*I discovered while writing this up that there is a new movie (Sept 2018) based on this book - filmed by the author's friend Bruce Beresford, who wrote the introduction to the copy which I read. I can only find the trailer so far but hope to see it someday. Hopefully that means there will be a new edition of this book released so that it can be more easily found!