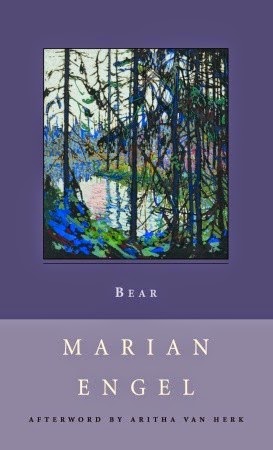 So here's another Canadian classic I never read in university, but I thought I should really get to this scandalous novel at some point. It seems to elicit salacious tee-hees from most, so I wanted to see whether it justified the response.

People always seem shocked that this novel won the Governor General's award for fiction in 1976, mostly because of the 'sex with a bear' thing going on -- that's the shock reason, I mean, not the reason it won the award. Though I sometimes wonder.

Anyhow -- the story. Lou is a young archivist, stifled in the hot summer in Toronto. She gets an assignment to head north and catalogue the collection of Colonel Cary, an eccentric man who's left his middling library to her institute. Lou finds that the library, housed in an isolated octagonal house on an island, is rather bland and will take no time at all to sort through. But who's to say no to a lakeside stay rather than a cramped Toronto apartment in the summer? So she works slowly and methodically, being rather distracted by the large and highly tame black bear that has come with the property.

There is a lot of metaphor going on. Lou is single, having desultory sex with her director now and again; she feels dissociated from herself, with no roots to rely on; she ends up trading sex for handyman chores while at the cabin; and of course, there is the bear. There is a sense that she is trying to reclaim her natural, animal self through this theme -- trying to find that essential core of self-knowledge -- trying to merge with the wilderness at the heart of Canadian identity (especially in the 70s rising of CanLit). But there is also actual, physical sexual contact with the bear. The previous owners of the house were fascinated by bear lore, and Lou reads their collected bits of information as the summer progresses, adding layers to her relationship to the bear and the wild in general. By the time she is ready to leave, she has changed, transforming her sense of self as she heads back to her regular life.

I found this novel very much of its time, with the focus on women's lives and agency and identity that was so strong in this era. The bear sex part is not as nudge-nudge wink-wink as I had expected, though I wonder what induced her to so graphically describe it, other than its beginning as a short piece intended to be part of a collection of pornographic writing by "serious writers" that she was trying to publish as a fundraiser for the newly established Writers' Union of Canada (established by Engel, in her living room). Nevertheless, this is a story about much more than this titillating content which seems to be the extent of most readers' knowledge of it. It certainly stands on its own.

A few other Canadian Book Challenge participants have read this one; you can read Eric's recent review, complete with a look at how this book has been presented via multiple covers over the years.