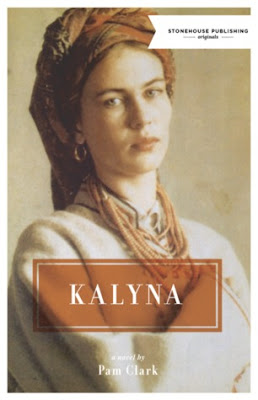 I won this book in a contest run by a Ukrainian arts organization, and was delighted -- I really wanted to read it and really small presses like Stonehouse don't often appear in my library's collection.

This is a historical novel, which opens with a couple from Ukraine who choose to emigrate to the great promised land of Canada a few years prior to WWI . They are leaving their homes and families in Ukraine for the promise of owning land and finding freedom in a new country.

Wasyl and Katja are young and newly married when they head to Canada, befriending a young man who is all alone on the ship as well as an alarmingly depressed woman whose husband was denied passage and so is travelling alone. Katja helps her survive and function until they get to Montreal, where she is able to wait for him to follow. Ivan, meanwhile, follows them out to Alberta where they homestead side by side in Edna-Star, a small community near Edmonton, where there are already some other Ukrainians.

Katja is a woman who is stronger than she knows, and all the struggles of homesteading, bearing children and keeping going when disaster arrives illuminate this strength. The disaster takes the form of Wasyl and Ivan being arrested for not having papers with them, once WWI starts and immigrants from the Austro-Hungarian Empire (which included Galicia, or Ukraine, at that time) are considered enemy aliens, despite the fact that they fled that empire on purpose.

Wasyl becomes a leader in the Banff Internment camps, staying calm and level-headed even in the face of what was essentially forced labour, building a mountain road by hand. Cold weather, inadequate clothing, shelter or food, and undeserved imprisonment and cruelty by some guards drove some men to try to escape, with at times deadly results. Wasyl is a determined man, however, and will put up with many things in order to be able to return home to Katja. I maybe liked Wasyl because of his strong, dependable character, or maybe it was partly because my great-grandpa who immigrated in 1911 was also named Wasyl.

The internment of Ukrainians in WWI is not a familiar story for many Canadians, but I feel it's vital for us to know, especially in this year of celebrations of our 150 year history. It is important to recognize faults and errors in order to progress without repeating them.

There are a few weaknesses in this novel -- there is a villian of the piece, Dr. Smith, an Anglo doctor from Edmonton who is a bit of a failure, and goes to this small settlement of Edna-Star where he can be a big fish in a small pond. He has an eye for the ladies, especially the pretty young married ones, and there is a rape scene that I found quite disturbing. Later on in the book it becomes more understandable what his role in the book is, but for the first half I was not convinced this subplot was necessary. And 2/3 of the way through the book, it jumps to the story of Katja's youngest daughter, Kalyna, who is now a young woman heading to university in Edmonton, which brings up a whole other element of Western Canadian history. I was so invested in Katja and Wasyl's story though, that I would have liked more of that instead of a new element; Kalyna could have had a whole book to herself!

But I still think that this was a honest effort to shine a light on a part of Canadian history that is top of mind for many of us with Ukrainian descent. The story is straightforward, appealing to readers who would like to learn more about this part of history and/or who are interested in the particularly female experience of immigration & settlement -- I think that the women in this book are really at its heart, and are what kept me reading.

Barbara Sapergia's Blood & Salt is another, slightly more literary novel about the internments, with a strong male lead (and also Kalynas), while Lubomyr Luciuk's groundbreaking academic work, In Fear of the Barbed Wire Fence, is the source of much of the fiction that has followed in this vein.