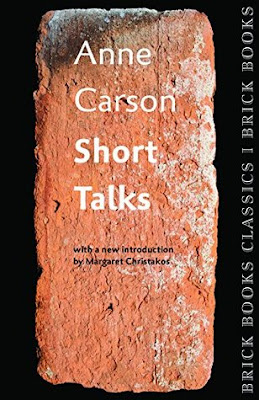 Another in Brick Books' reissuing of classics from their backlist, done in honour of their 40th year of existence, this was the first volume of the collection.

Anne Carson is a classics professor and a former McArthur Fellow. She's won many awards for her work, but I must admit that personally I felt that this volume was the one I've most easily understood, absorbed, and enjoyed.

It's a collection of small poems in the form of paragraphs, ranging from a couple of sentences to nearly a full page. They are reflections on various themes, some funny, some wistful, all clever. Her study of classics comes through in many of the poems; intelligence and wit shine in this book.

A few of them reminded me of Sei Shonagon, and by extension also Suzanne Buffam's recent A Pillow Book. The resemblance is clear in pieces like "A Short Talk on Major and Minor", which starts with a brief list of each (in sentence format). There is also a certain similarity in the attention to daily life & the minutiae of experience between these two books.

There are other poems that are short talks on a topic which, as it turns out, the poem is really not about at all. And some of the very shortest pieces turned out to be favourites. I think the one that struck me most was "A Short Talk on the Sensation of Aeroplane Takeoff" -- it's a sentence long, but what a sentence! Joyful and unexpected.

Another great reissue from Brick Books, I enjoyed musing over this one slowly and uncovering some new ways of perceiving the world. Recommended.

Listen to Anne reading a few of these pieces here: